Man I slept like a baby on Sunday night – all warm and toasty in my apartment after the adventures of the previous day and and night. It was great. The weather for driving wasn’t going to be great today, so I decided to just have a day where I chilled out a bit (literally) in the city. 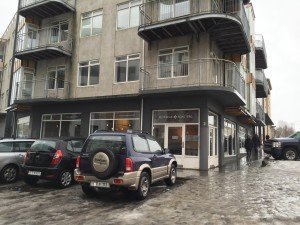 After trekking twenty minutes to get to the nearest ATM, I headed around the corner from the apartment to a hipster coffee shop called Reykjavik Roasters. But even though it was like a two minute walk away, it was a bit of a treacherous walk. 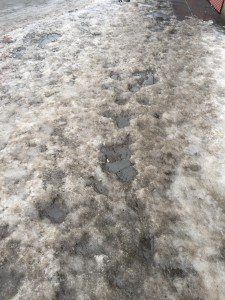 That’s what the pavements looked like. So while everyone else just seemed to be walking as normal, I was tottering uphill (and later downhill) very carefully so I didn’t end up on my bum. 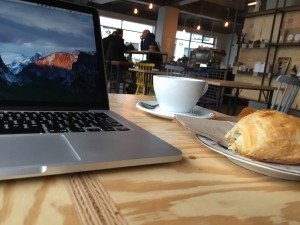 Inside, I grabbed a satisfying americano and a croissant while I wrote my blog, before heading back to the apartment. I didn’t really have a plan for what I was going to do today – but that kind of was the plan at the same time. I flicked through my guide book to pick a spot for lunch, and then headed along the main shopping street, Laugavegur. 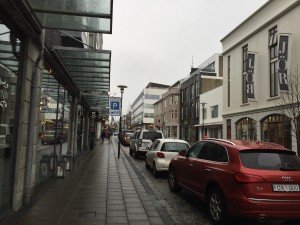 There’s none of your chain stores here really – as my driver from the night before had said, it’s a lot of “puffin” shops, aimed at tourists, cafes and restaurants, plus a couple of home type stores and boutiques. 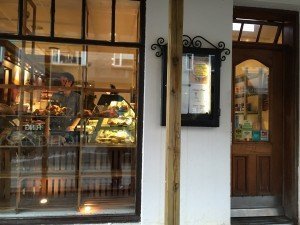 I headed into Sandholt bakarí – a small bakery. Sorry for the rubbish photo, but the outside of the building was covered in scaffolding. It was really warm and cosy inside, so I picked a table, sat down and ordered a pork sandwich and mocha (can’t get enough coffee when it’s cold!) 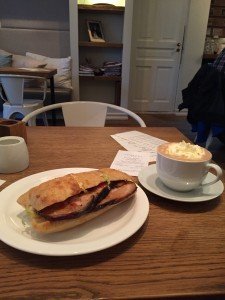 A lot of people go on about how expensive Iceland is. To begin with, I hadn’t really noticed it, but the money does soon stack up. A bottle of Diet Coke which would be about £1.30 at home is more like £1.95 here. And that lunch came to about £9.50, where it would maybe be £6 or £7 at home. So it is definitely more pricy, but not amazingly so. I think it’s the cost of all the tourist stuff like tours and transfers that makes the money add up faster than you think.

I’d spotted a cool looking building down by the harbour when I’d gone on my whale watching trip the day before, so looked it up in my guide book and saw they ran guided tours every day at 3.30. None of the other sights in the city like museums had really caught my eye, so I decided to head down to it. 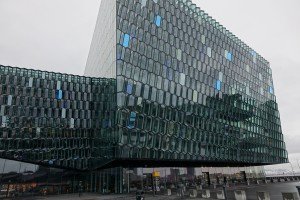 It’s basically a big concert hall called Harpa. And it’s one cool looking building. Lights flicker along the outside of the building in seemingly random patterns. Inside apart from halls for shows, there’s a fancy restaurant, a cafe and a couple of cool designer shops selling souvenirs and house stuff and books and so on. 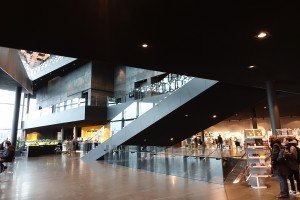 Speaking of money, the tour cost about £10. We were met by a really nice lady, who then whisked us off into the main auditorium. There was an opera group rehearsing, so we could only sneak in (and not take any photos) while they were on a break.

The acoustics seemed really impressive – the walls were actually false, and could open up to reveal a five metre gap to let sound reverberate. After that, we basically went on a tour of different parts of the building.

And saw other, smaller performance spaces. 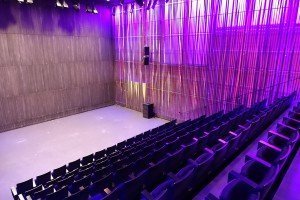 Our guide explained how the economic crash had affected the building of the venue, and how they’d been forced to use local materials wherever possible instead of fancier Italian marble for example.

I found the foyer particularly impressive – it’s a great, cool space. I couldn’t help thinking Belfast’s Waterfront Hall would have been a lot better if it had been a bit more architecturally adventurous. 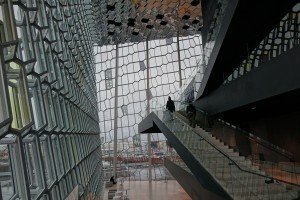 When the 40 minute tour was over, I headed to the Tourist Information Office – I wanted to check driving conditions for the Golden Circle the next day. It seemed like it would be ok, and the lady there was brilliant – answering all kind of stupid questions like “Yeah, but will it REALLY be ok to drive” and stuff like that. I also checked out some local swimming pools with her, and asked where I might be able to pickup a specific souvenir I’d been asked to get.

After that I kind of just wandered in and out of some shops – including some touristy ones, but I didn’t see any souvenirs that really took my fancy, so I just picked up a couple of postcards. 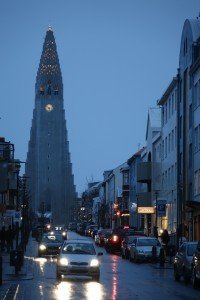 The weather was a bit grim again – actually pretty mild, but a constant drizzle of rain which meant it wasn’t the best for walking about in. I popped into a cafe and wrote my postcards, and then started thinking about what to do for dinner as I wandered back to the apartment. By now weirdly (I really don’t know what else I did all day) it was about 7pm. 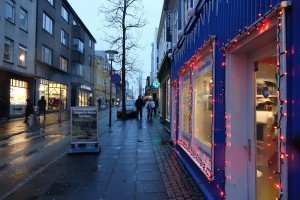 I hadn’t eaten out for dinner at all since I’d got here, but the thought of wandering all the way back into the part of town where the non-pricy restaurants were wasn’t appealing. So in the end, yes it’s boring, but I just picked up a sandwich from 10-11, and chilled out in the flat catching up on some TV.