Firstly, thanks a LOT to the Spanish girls having a party in the room next door on Friday night! I loved your raucous singing along to The Ketchup Song, and it was great to be able to hear the guy you had on speakerphone at 3am in the morning. GRRRR!

So it was after a night of interrupted sleep I woke on Saturday. Man I felt like I hadn’t slept a wink. But I got up, and headed out. First stop today was Mercat de la Boqueria – one of Barcelona’s food markets. 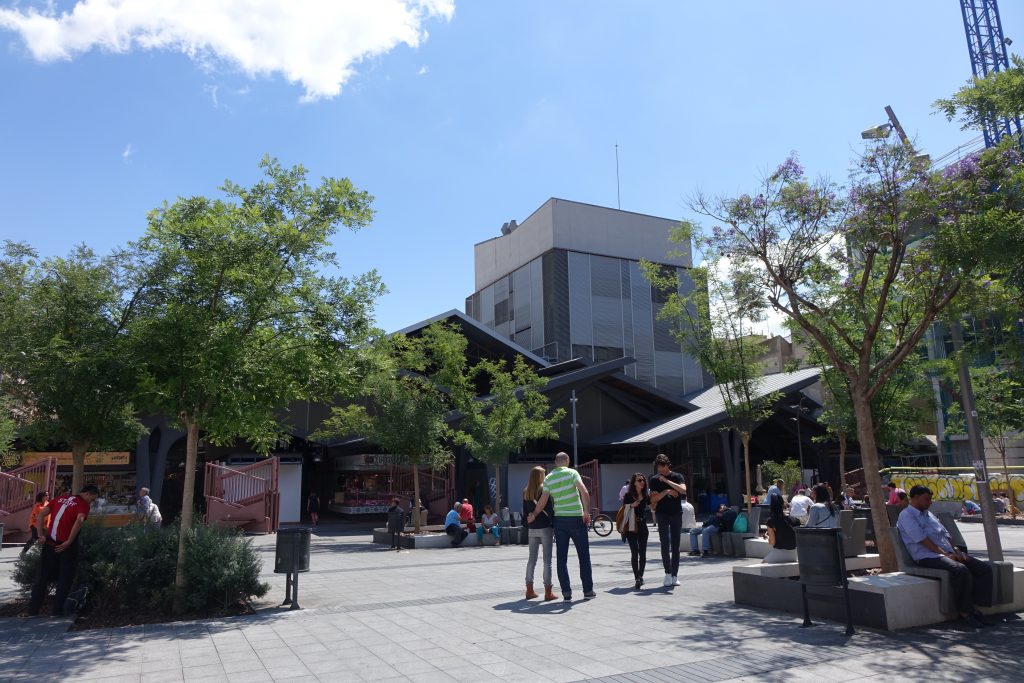 It was only a short stroll from the hotel. It was absolutely RAMMED inside. Full of Barceloní picking up fresh produce, and tourists taking photos. The place seemed to sell everything – fish, meat, hams, coffee, oils, spices, dried mushrooms, fresh fruit and vegetables. And as you walked past each stall the smells were amazing. 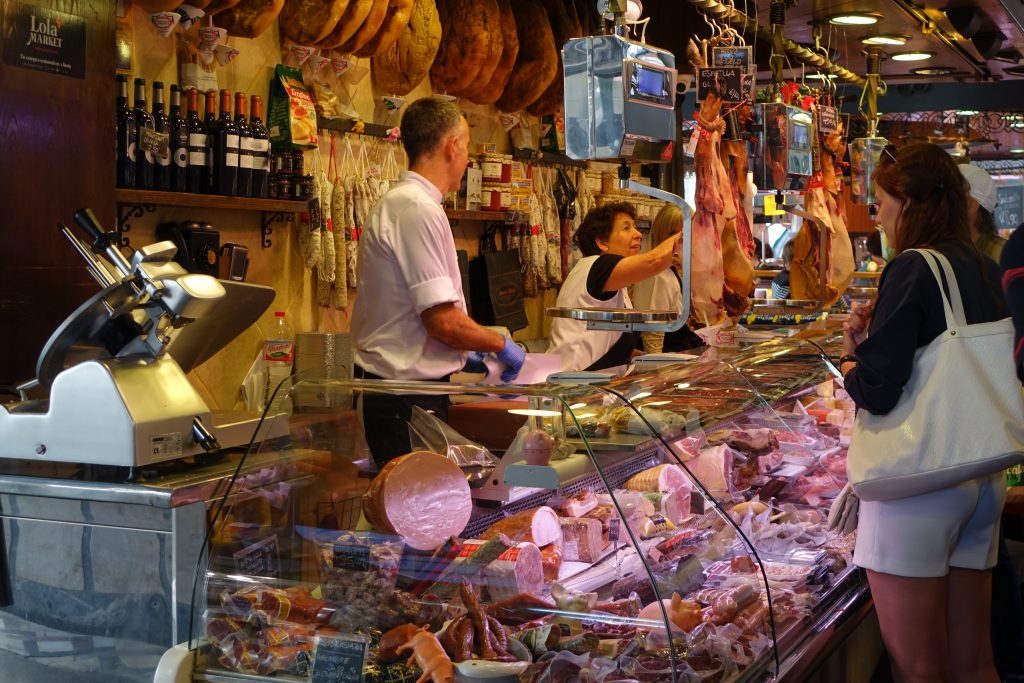 The seafood on offer was particularly impressive – I only wish St George’s Market at home had half the range (though maybe I’m just not there early enough!). There were massive octopuses, and fish that I’d never seen before in my life. 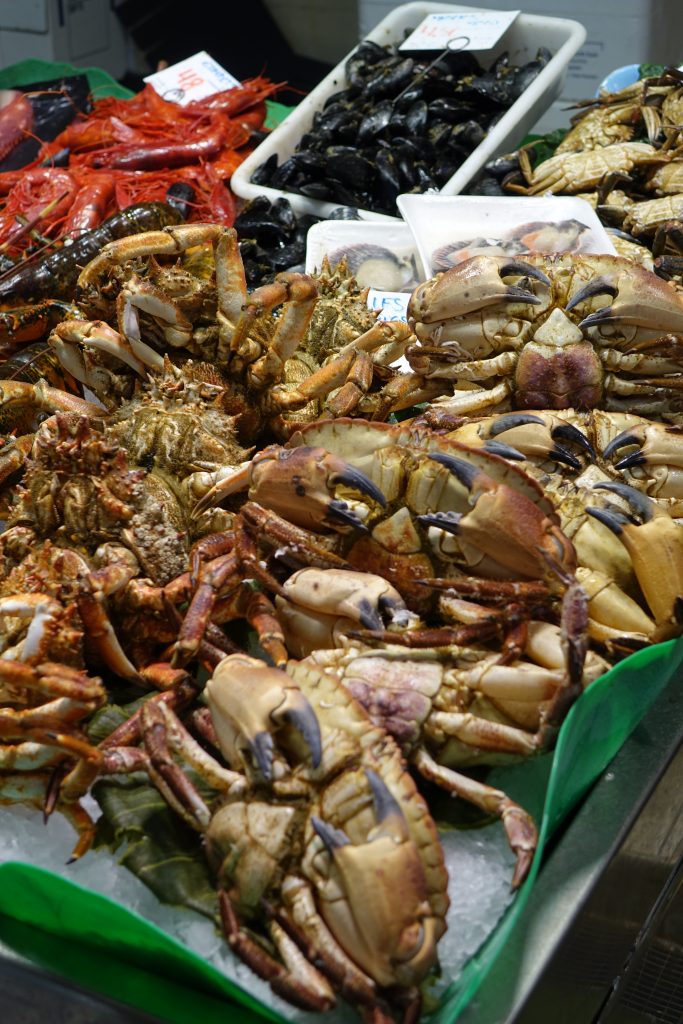 These beasts were alive and kicking!

Leaving without purchasing anything, I headed down La Rambla – a really touristy place – all the guide books say to basically avoid eating in any of the restaurants littering the street. 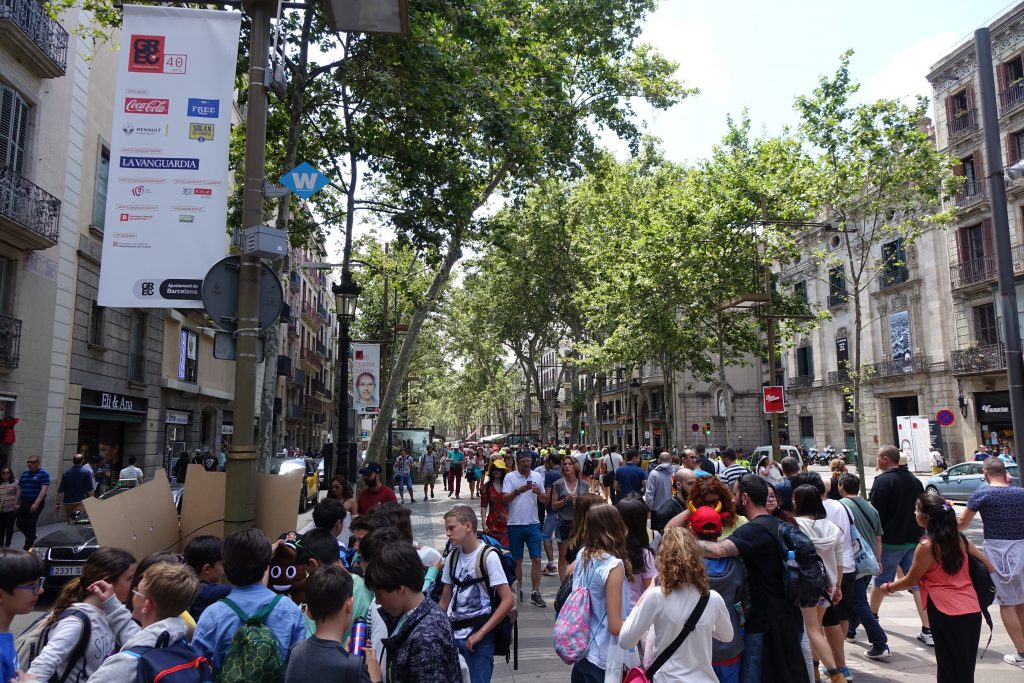 It was thronging! Sneaking down a side street, I then found a little oasis of calm – Plaça Reial.  Stepping in to the centre, I felt like I was in Cuba or something – it was gorgeous, and full of people sitting outside restaurants, having lunch in the sun. 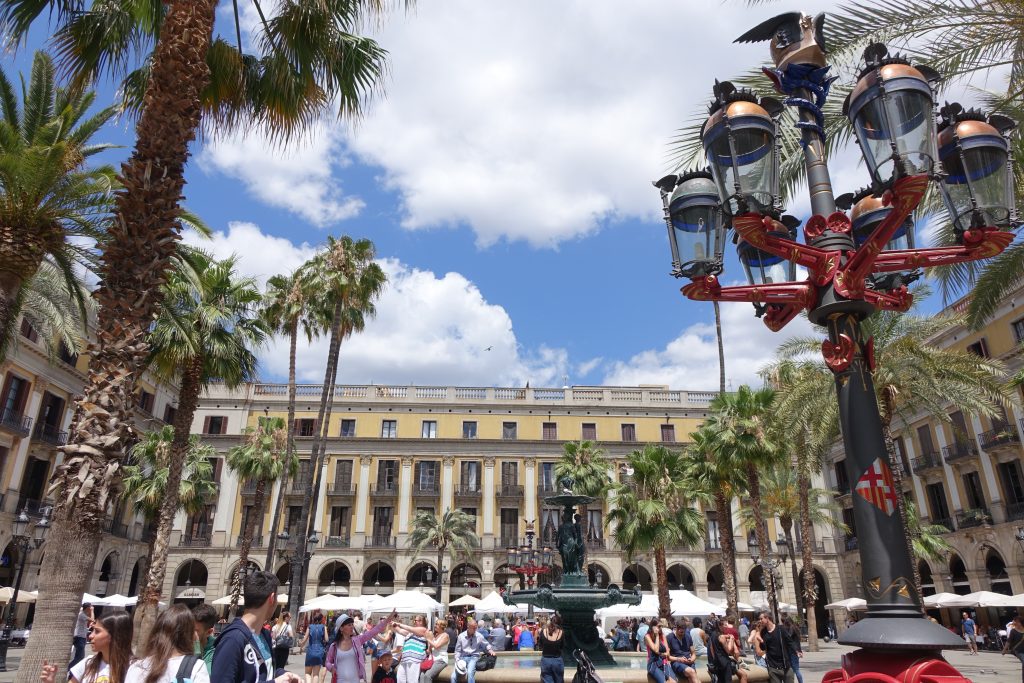 It was time for me to grab lunch now – so I headed to the El Born district, navigating with my trusty Google Maps. Taking twists and turns down narrow side streets, I arrived in Pla de Palau – where I’d read local restaurants would be hosting a food fair. Well I couldn’t see any food fair at all. The streets were empty apart from a scattering of people sitting outside eateries. I checked the website, checked the map again, and was about to give up when I spotted a couple of red tents across the street. 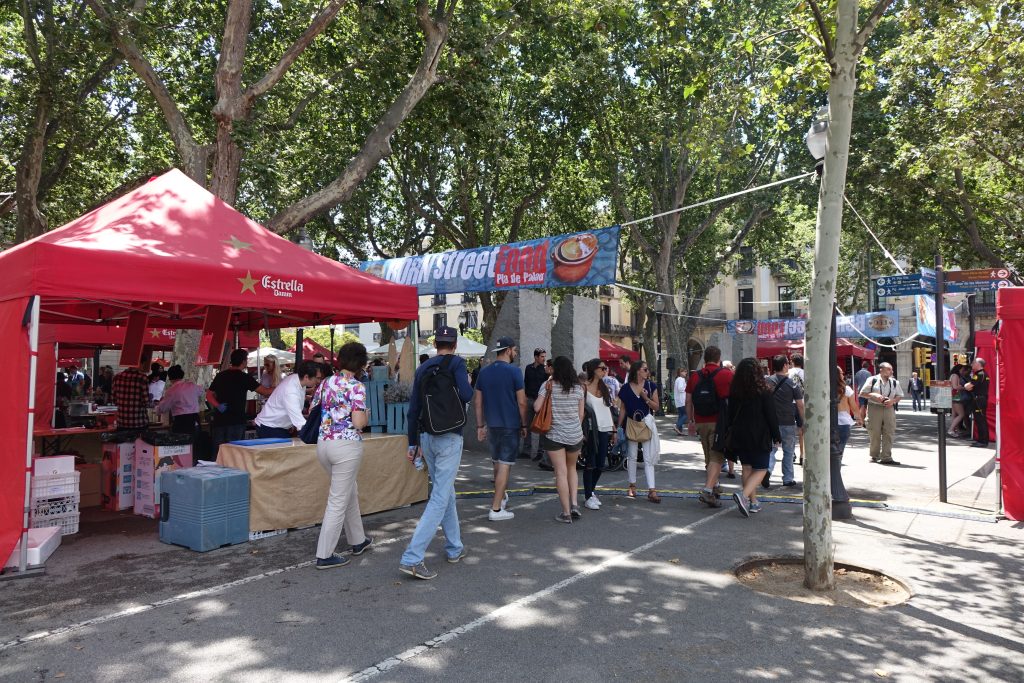 Found it! I went in and bought six tickets for €15, and had a wander round the stalls, looking at the food on offer, and soaking up the atmosphere in the sun. A lively band was playing, and everyone seemed to be having a good time! First up, I picked up a plate of grilled sardines – I’m a sucker for sardines. They came with roasted peppers and two pieces of bread. 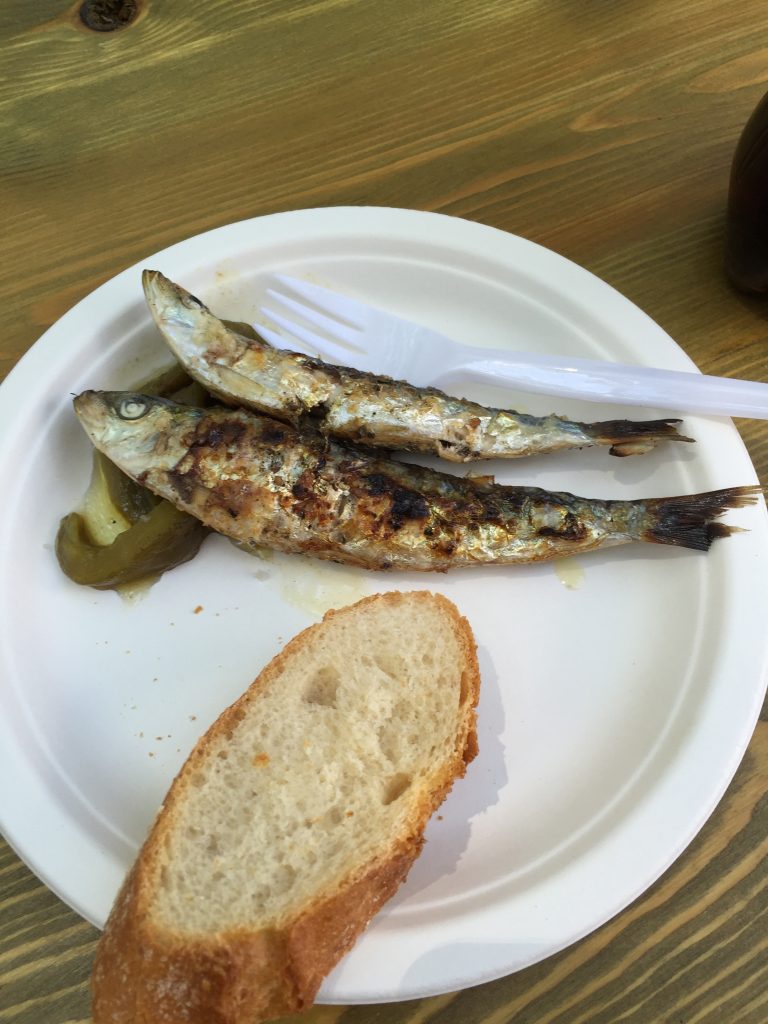 I sat down at a table, and while elsewhere I saw people struggling to debone the fish, being a pro with sardines, I sliced right up the belly and had the bone out in one go. They were delicious! 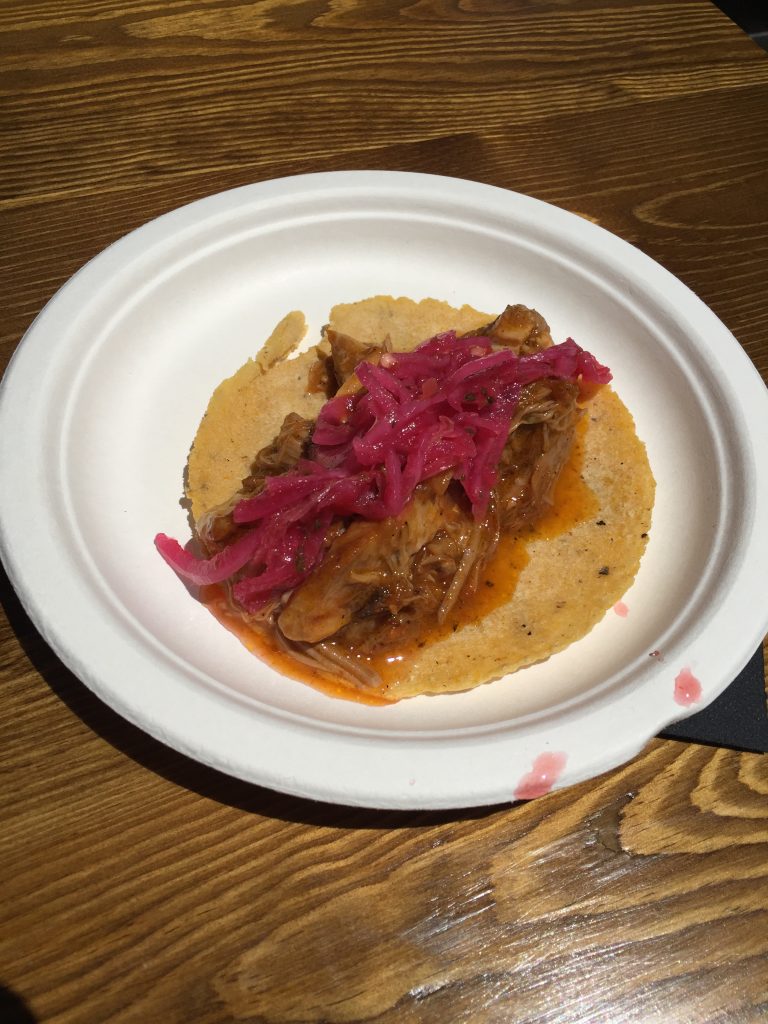 Next up, chicken tacos with pickled red onion from a nearby Mexican restaurant. Finally, the smell of pigs roasting, being supervised by two elderly men had me deciding on my third dish – a roast pork sandwich.

Fully satisfied, I hopped on the metro, and made my way to Plaça Espanya. I was planning on walking up part of Montjuïc, a mountain overlooking the city. The sun was splitting the pavements as I climbed through nice parklands – but it wasn’t too strenuous thanks to the numerous escalators! 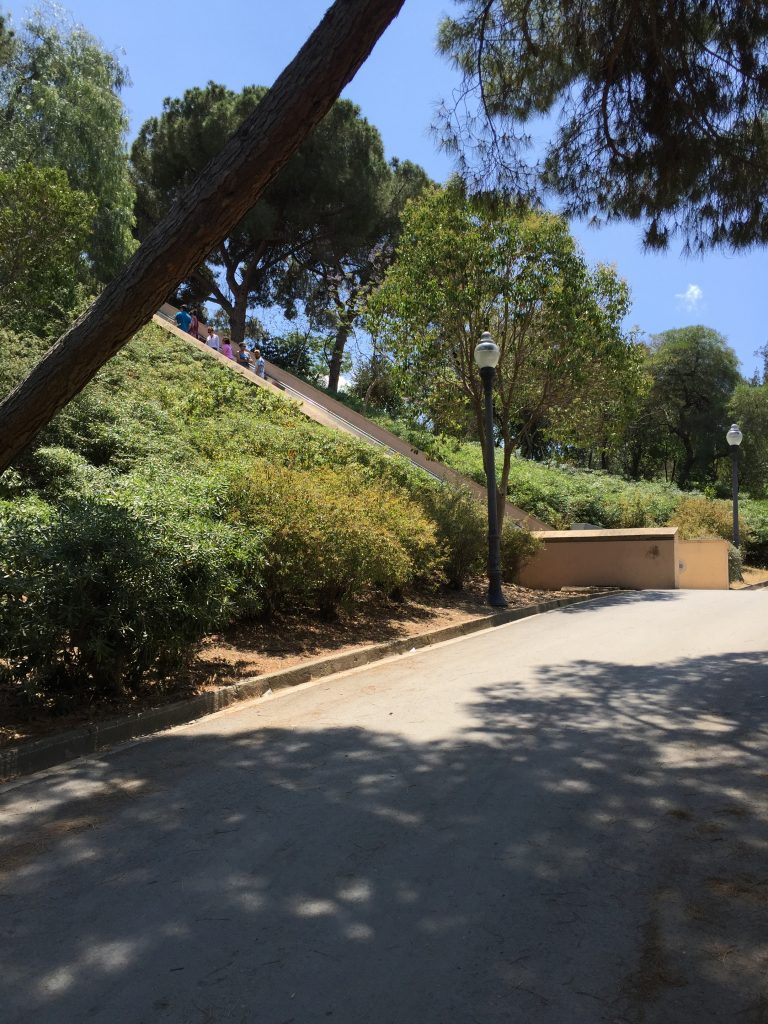 Finally I reached the first of my destinations on the mountain – Piscine Bernat Picornell – a swimming pool used in the 1992 Barcelona Olympics. I’d actually wanted to visit this one, which promised a stunning view and was featured in a Kylie Minogue video, but it was closed until July, so this one would have to do!

The young lady behind the counter was really helpful, and lent me a padlock for the lockers in exchange for holding on to my passport as a deposit. I paid €11.50, which entitled me to use all the facilities (gym, jacuzzi, sauna and pool) and headed down to get changed. That’s when it struck me that I hadn’t thought to bring a towel with me. Heading back up to reception, the receptionist told me I could have bought one from the swimming store, but it was closed. So that was that. Towel-less!

The changing rooms were…. a bit smelly. I got changed and headed outside. 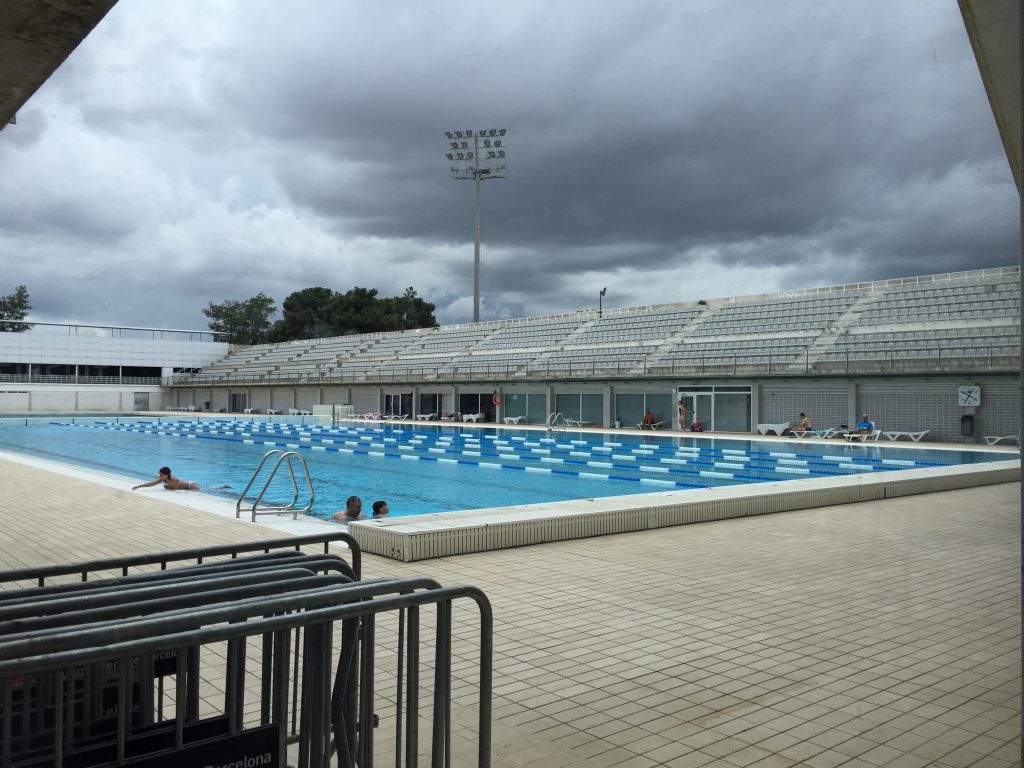 The pool wasn’t too busy – and was a 50m one. The first thing I spotted was there was no shallow end – and it was deep. So once you got in, you couldn’t touch the bottom, which was a bit annoying! There was a wee groove you could put your feet in, but it meant once you were in the water, you were constantly swimming or hanging on to the edge. And man the water was cold!

Back home I swim 2km at least four days a week. So that would equate to 40 lengths of this pool, but boy I struggled! I don’t know whether it was a lack of sleep, or the pool just being much bigger than I was used to, but I only managed 20 lengths before I called it quits.

I headed indoors, and headed into the sauna to dry off (remember no towel). I managed to get the dry but not sweating timing kind of right, and picked up my passport on the way out.

I took a stroll up Carrer L’Estadi, passing the Olympic Stadium on the way. The skies were darkening, and the rain came on as I arrived at my next stop – a cable car station to take me to Castell de Montjuïc – a castle which apparently offered great views of the city. 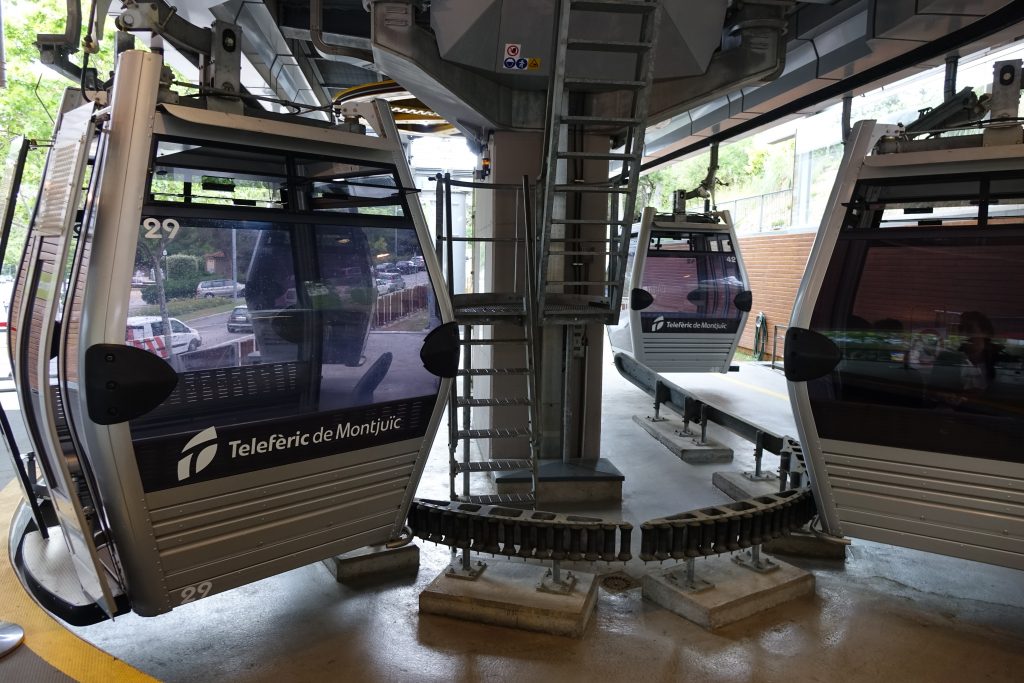 The cable car ride was €8 one way, or €12 for a round trip. I took the first option, and was soon enjoying a pretty fast (and hairy when it started swaying in the wind) ride up to the castle. 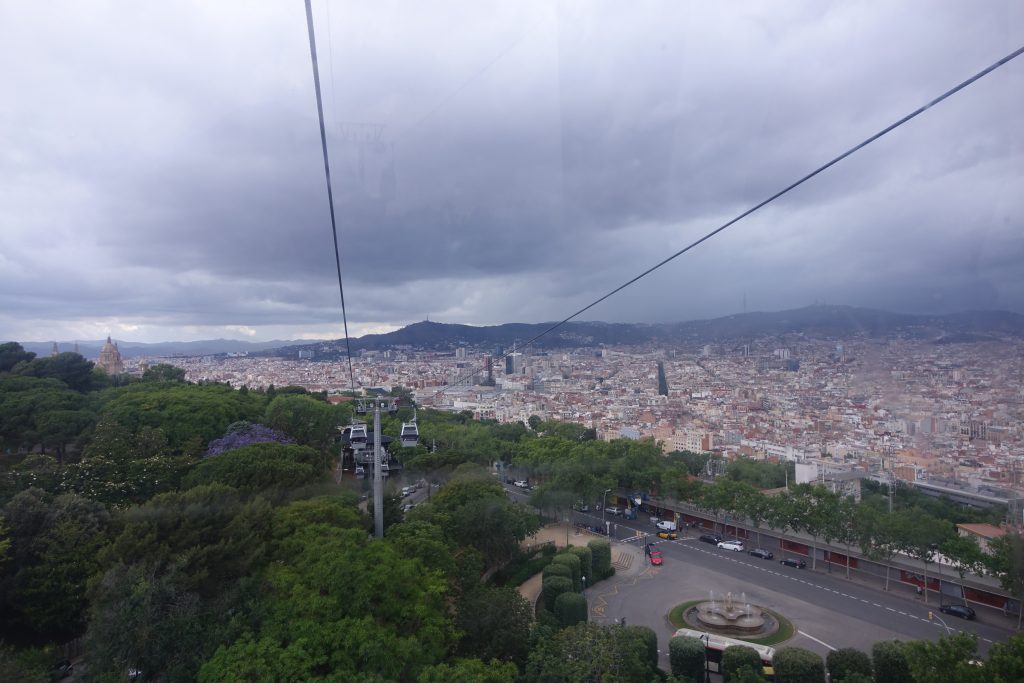 And soon I was there. I paid my five euro entrance fee and wandered across the drawbridge into the castle. 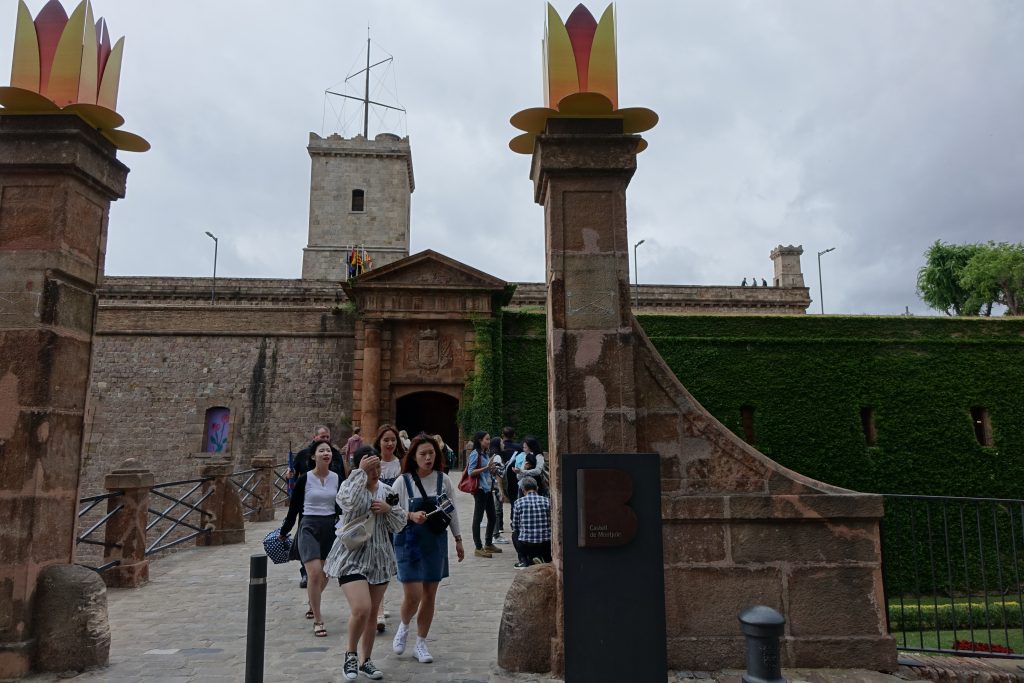 Then I heard thunder. And saw lightning. Then the heavens opened wide up, and rain came belting down. Like impossible to go out in belting down. I took refuge in a room with an exhibit dedicated to some gardener, and sat there for what seemed like an hour, but was probably only 20 minutes, until the rain stopped. 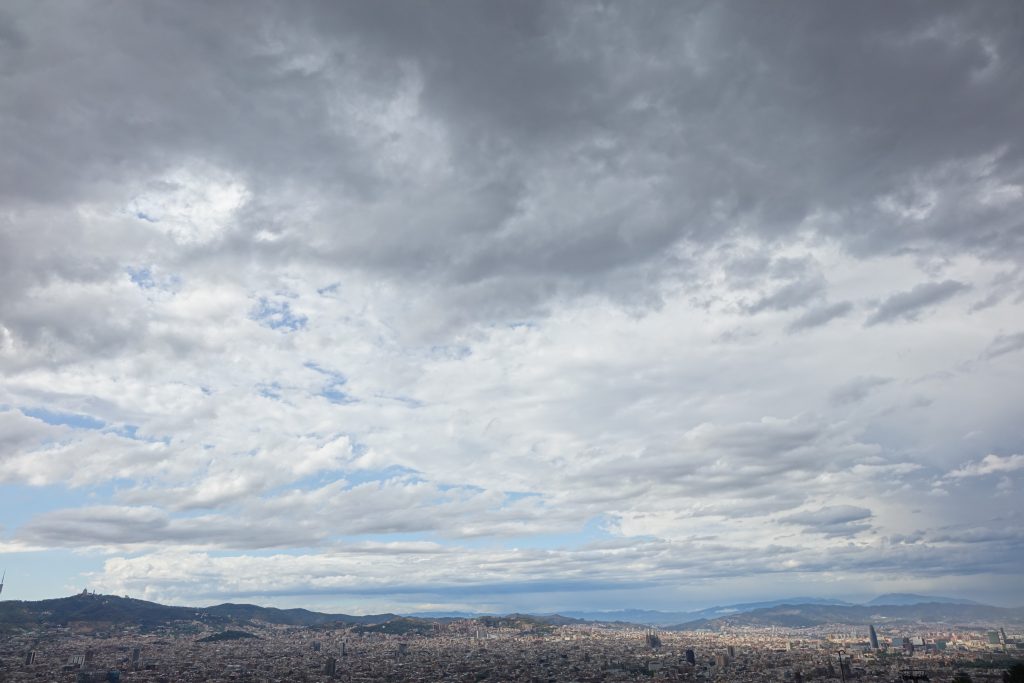 The views were impressive… including one of the Sagradia Familia… 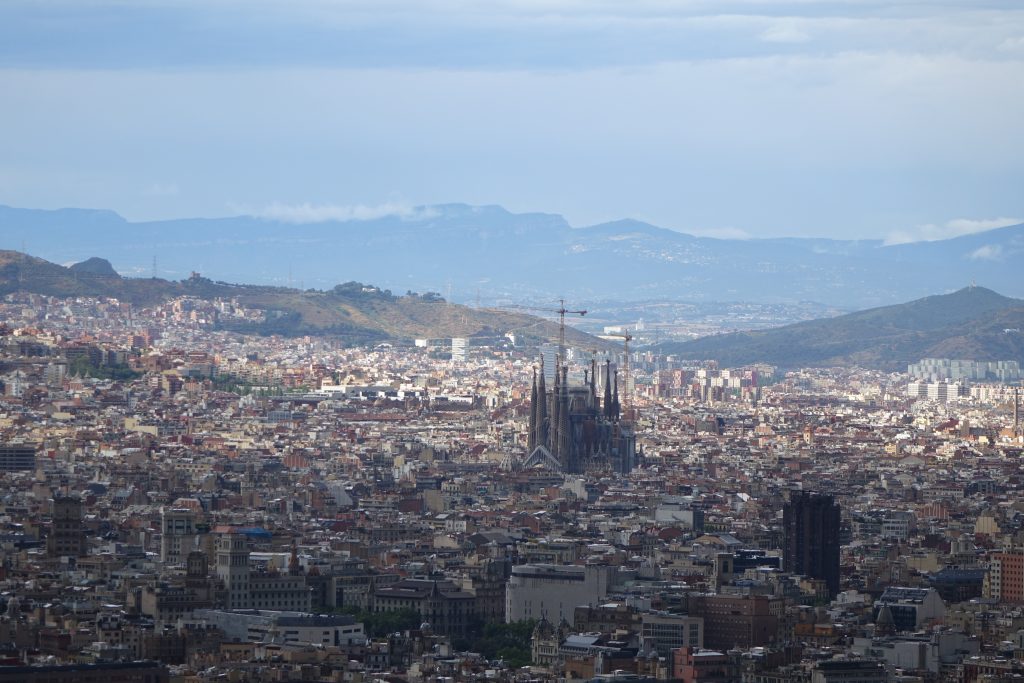 but apart from that there was very little to do or see in the castle, meaning I’d struggle to recommend it really. I think I’d have been better off visiting the nearby Miró Foundation for some culture instead.

I caught a bus back down to Plaça Espanya and then was at a bit of a loose end. I had two hours or so to kill before the last thing on my list for the day. By this point I was hungry, and decided there was only one thing for it – McD’s. I was just in the mood, ok?! I was tired from walking all day, but the nearest McDonald’s was 15 minutes walk away, or 16 minutes on the metro. Just my luck when I’d seen them all over the place! I decided to walk, and was soon passing through what seemed to be a local community fair and history demonstration (there were two guys dressed as gladiators anyway). 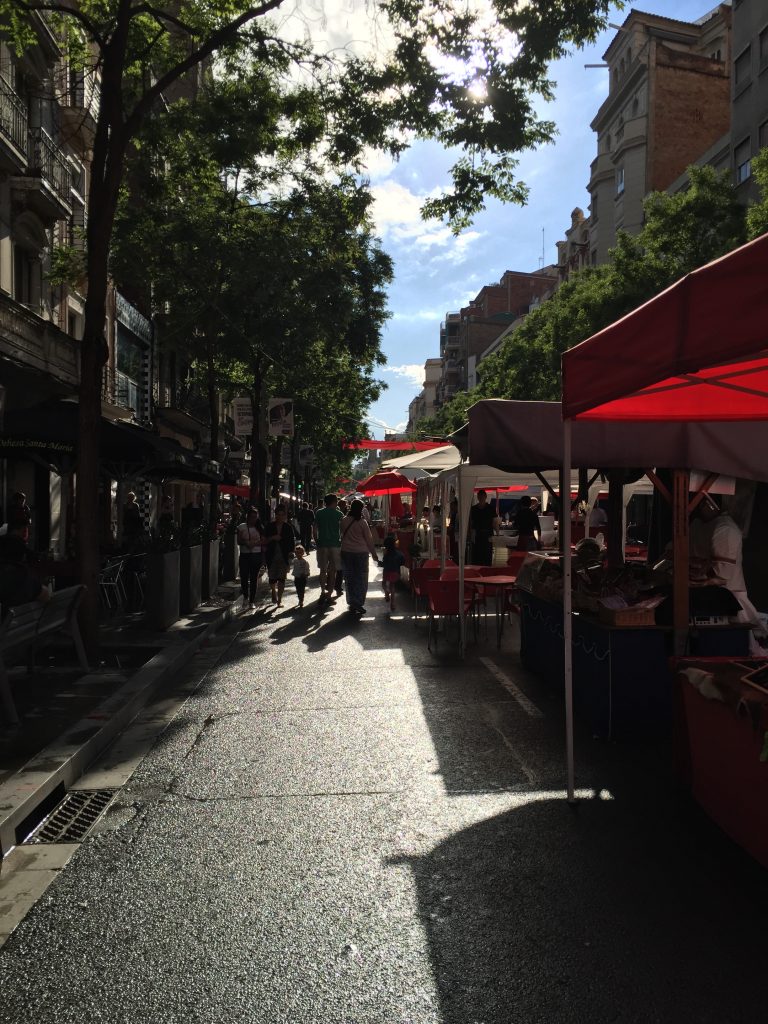 Turning up a side street and walking through a small park, I crossed a pedestrian bridge and felt like I’d really left the city centre behind. 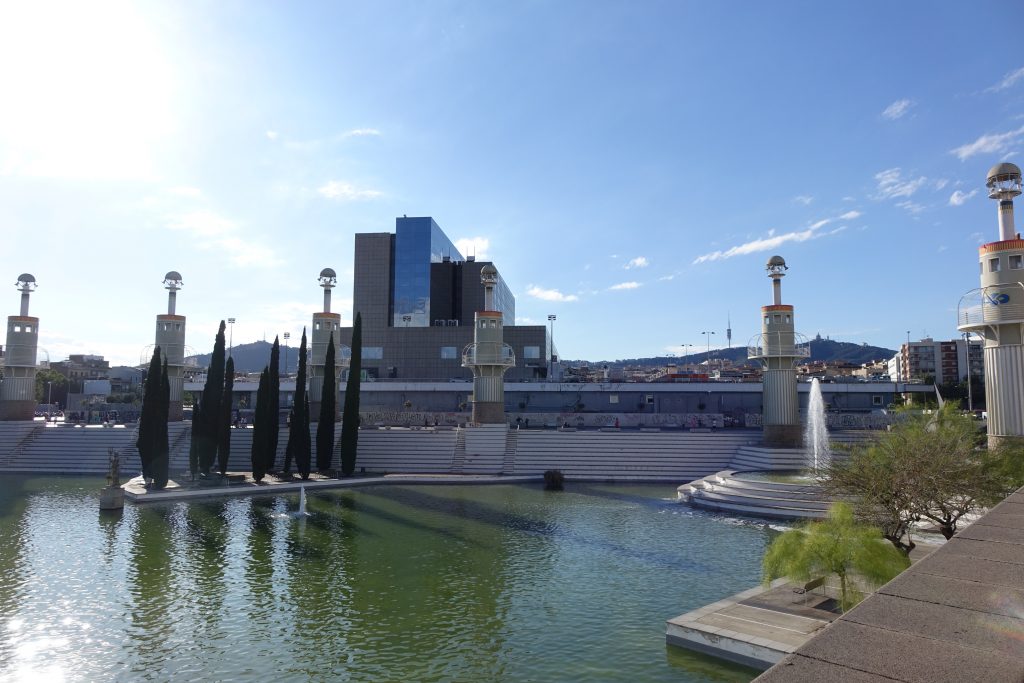 Kids were skateboarding, letting off bangers and dancing along to music blasting out a tiny boombox. Thinking I was not in a particularly salubrious part of town, I headed round the corner of that big building in the picture above and discovered it was actually the Barcelona Sants train station. And there was McDonald’s! I placed an order using the touchscreen, and was soon tucking in. I was tempted by the Large Big Mac with Bacon, or even the Chicken Big Mac, but decided on the Grand Extreme. I am still curious about the Big Mac with Bacon though, so I may need a repeat visit before I leave. 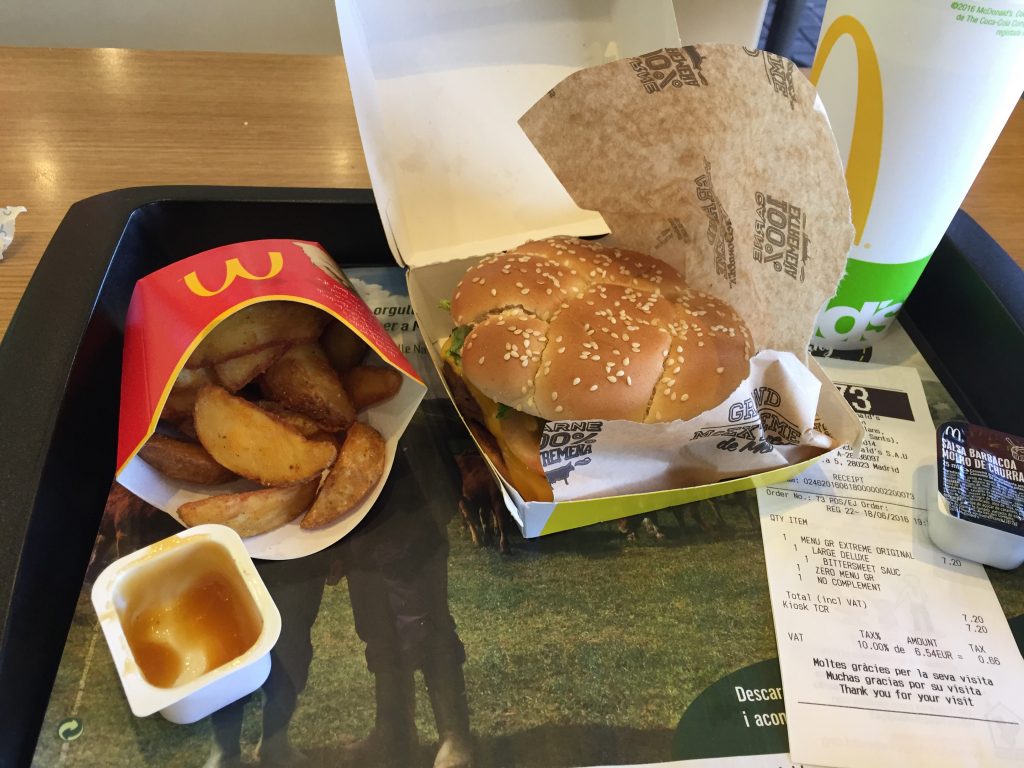 Weirdly, all my tiredness seemed to disappear after that – I was raring to go again! I headed back the way I came, and headed up the long promenade to the National Art Museum of Catalonia. By now massive crowds were gathering for the spectacle due to begin at 9.30pm – the water show set to music at the Font Màgica – or Magic Fountain.

The steps up to the stunning art museum building were packed out, as was every other space around the fountain. Street hawkers were selling selfie sticks, beers and toys, and soon the show began. 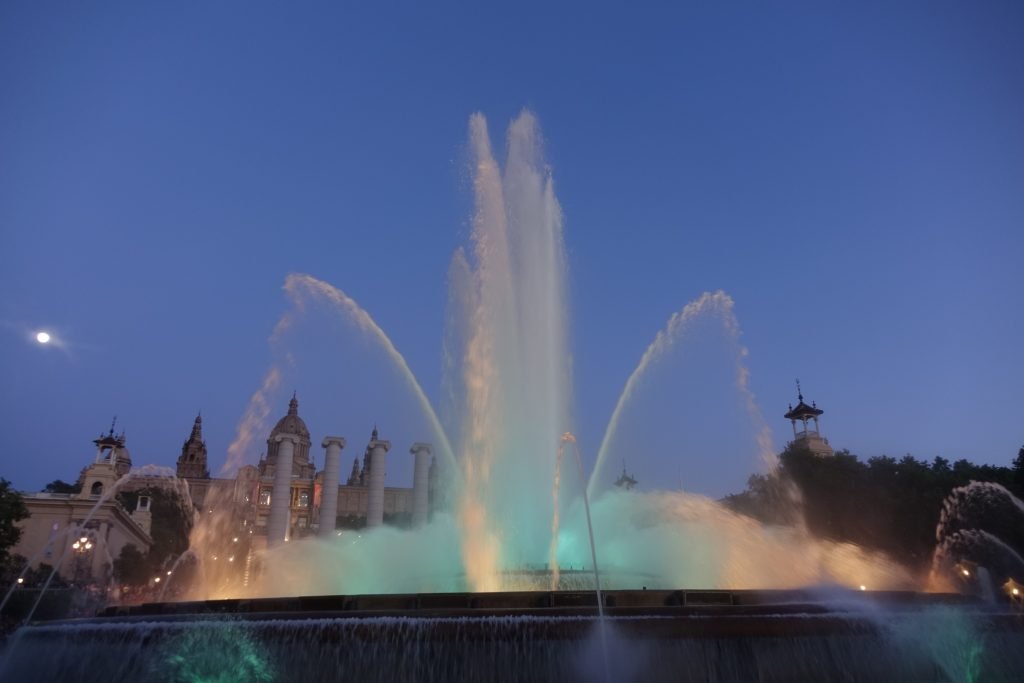 It started with “Barcelona” by Freddie Mercury and that opera singing woman. Cheesy or what! But it was pretty impressive, and the atmosphere was really friendly. 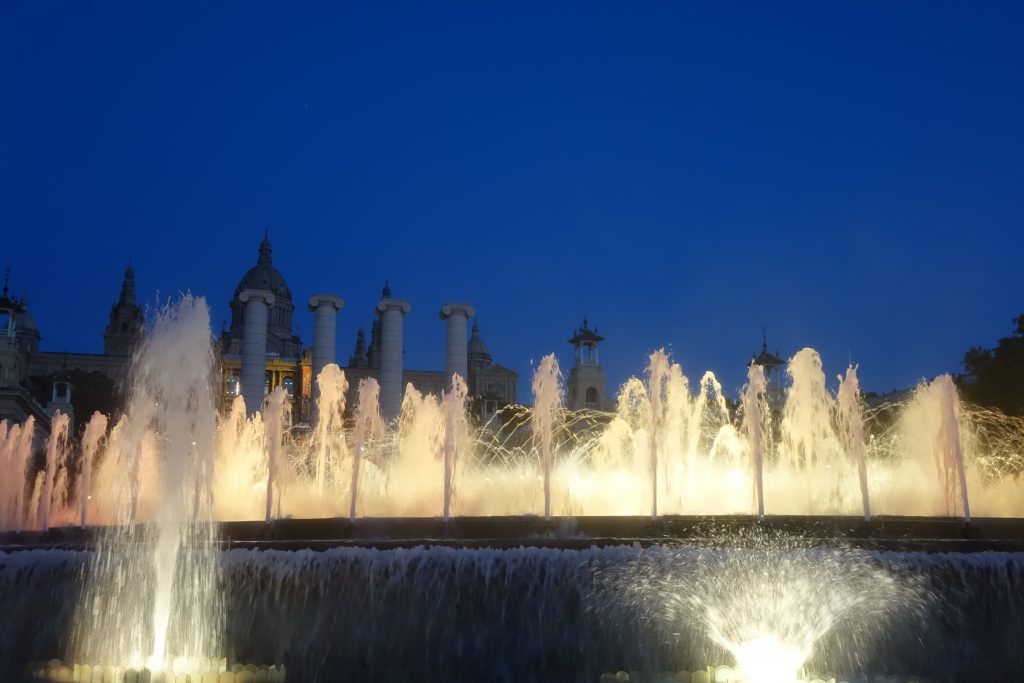 You’d think it would get a bit dull after a while, but whoever chose the soundtrack knew their cheesy music – there was Black Eyed Peas, Katy Perry, what I thought was Tiesto at some point, and more! I ended up just standing watching it for a good 40 minutes. Here, have a video of it!

I’ve got to say the setting is spectacular. The art museum looked amazing at night. 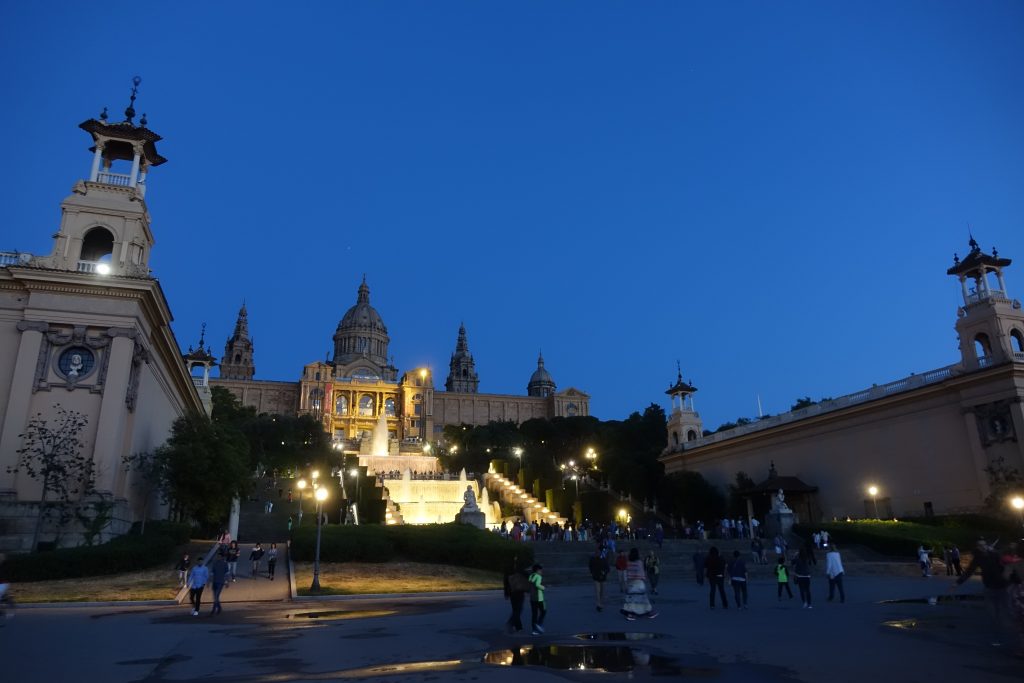 I don’t think that picture really captures it as well as it looked in real life!

By now it was around 10.20pm, and I was ready for bed. Unfortunately there was a metro strike on, which meant by the time I got to the station, the platforms were packed, but I only had to wait about 10 minutes or so, and after a short walk back to the hotel, I turned in for the night. It felt like it had been a bit of a weird and random day – looking back on it, I probably would have got to Montjuïc a bit earlier in the day and planned more to do once I got there. There is plenty to do, and I’d enjoyed my swim, but I think the castle had been a bit of a duff move.