I had great plans for Wednesday morning before leaving Reykjavik. I was going to get up at 6.30am, head for a swim at a local pool I’d read about, and then have a hearty brunch at a restaurant I’d read about before packing up my gear and leaving the apartment.

Needless to say, I woke up at 6.30 and hit snooze, so ended up not getting out of bed for another two and a half hours. Bang went my swimming and brunch! I headed round the corner for one last coffee from Reykjavik Roasters, packed up everything in the apartment, and dropped the keys in the mailbox. 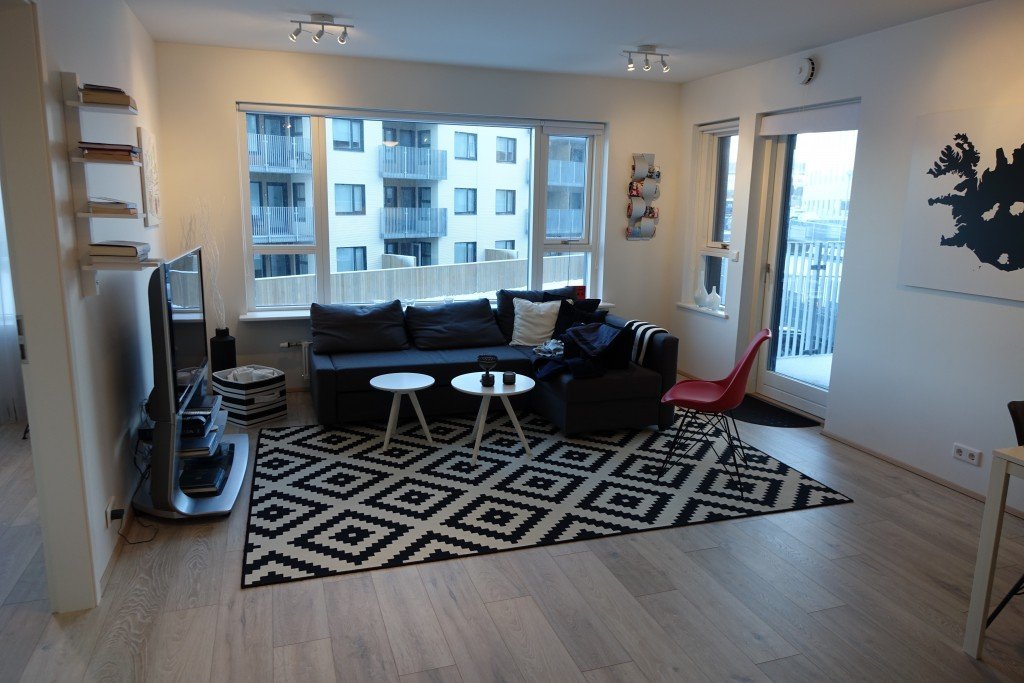 It had been a perfect spot to stay – I’d definitely use Airbnb again. Just having a base so close to the centre of town and with a washing machine and tumble dryer made it worth while! The hosts seemed really nice as well.

I filled up my hire car, and headed back to Avis to drop it off. After missing a turn off and a bit of a hairy U turn where I couldn’t work out what side of the road I was meant to be on, I finally got there, and waved goodbye to my little 4×4. 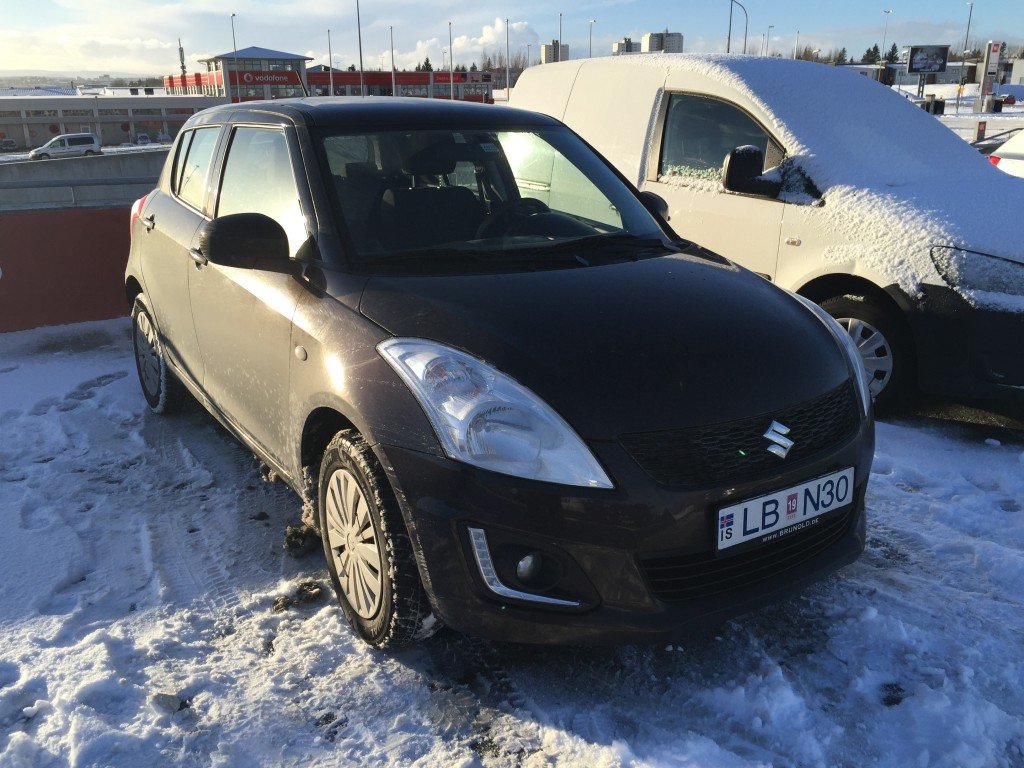 I was just glad I’d got the thing back in one piece, although I was a bit worried, having declined to lower my excess that I was going to get charged a fortune for a windscreen chip which happened on my drive back from Vik. There were three small chips in the windscreen as a result. Amazingly, the guy took one look and said “No, it’s fine, no charge.” Result! That was a weight of my mind.

I caught one last look at the drunken pig sign with Bonus Supermarket right next to the Avis office. 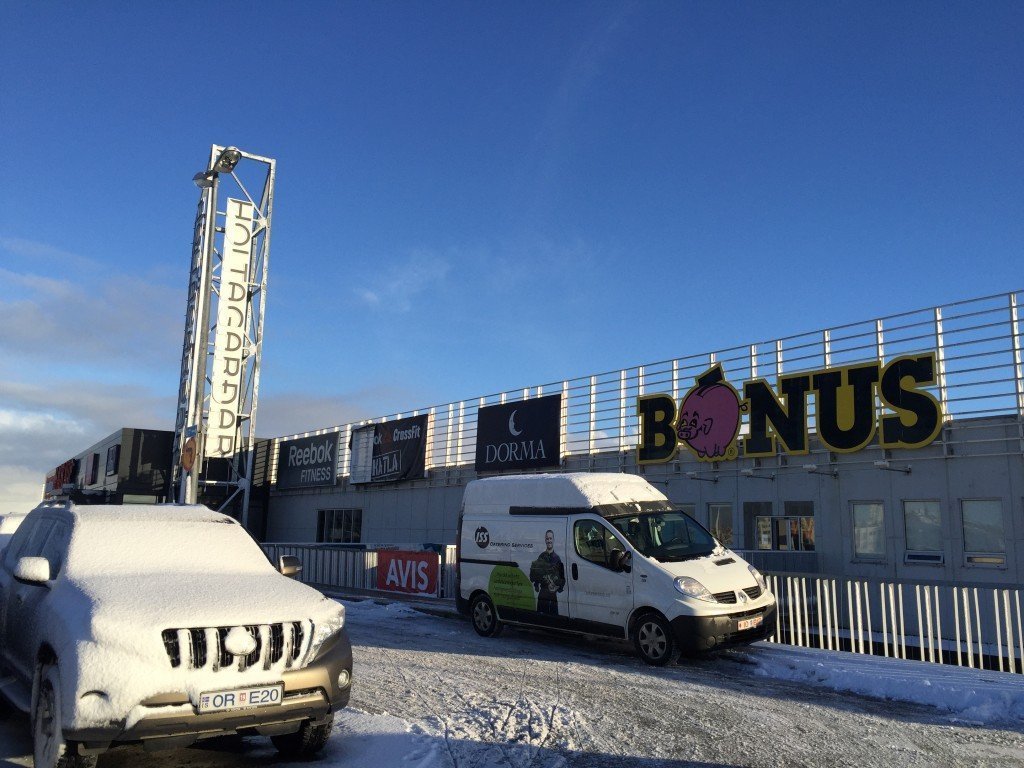 Then I waited for my transfer to where I was headed next. I’d stumbled across the Ion hotel in a magazine, and knew straight away that if I was ever to visit Iceland, I wanted to spend at least one night there. It just looked cool, and the fact it seemed to be out in the middle of nowhere held some appeal too. But once I’d booked my non-refundable room, I got an e-mail from the hotel saying a) the main road there was closed until May and b) if I was driving myself to get a 4×4 with snow chains fitted. That was enough for me to decide not to risk driving there in a hire car. Unfortunately, despite a bit of research, the only other option seemed to be a hotel organized transfer – at £110 EACH WAY! I was gutted, but I had not other option really as the room was non-refundable, so I decided I just had to suck it up.

My taxi driver turned up, and I jumped in. We had a great laugh and chat on the way to the hotel (about a 45 minute drive). Her eyes nearly popped out her head when she found out how much I was being charged – obviously the hotel adds a healthy supplement on top of the real fare! So a tip if you’re planning on visiting – call Taxi Service Iceland and get them to ‘do you a deal’ – you’ll probably save a good £30 – £40. 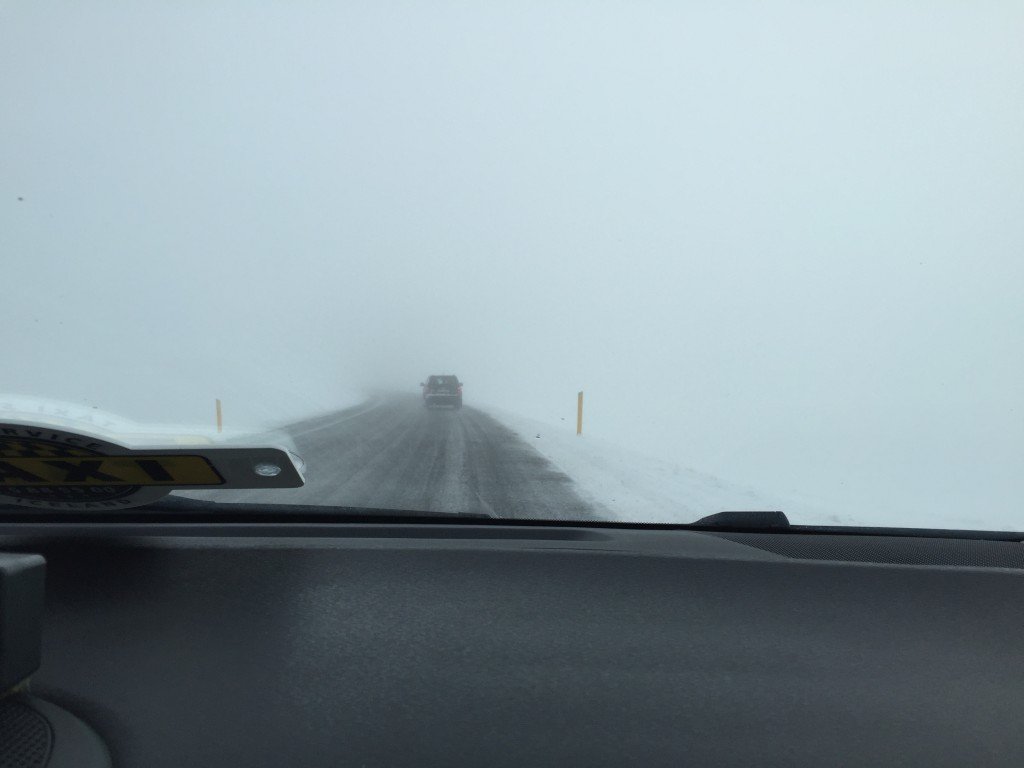 The roads and weather got a bit bad during the drive, but I think I probably could have handled it. Better to be safe than sorry though I guess! 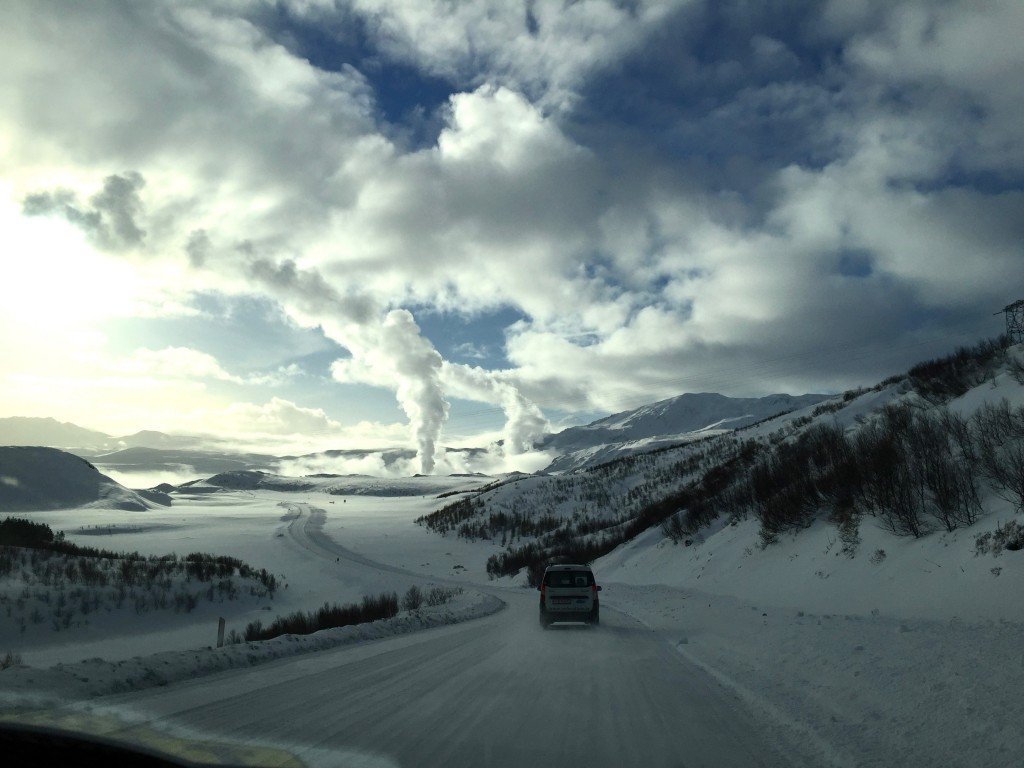 Soon, we could see clouds of steam from the geothermal plant beside the hotel, and then we were pulling up the drive. 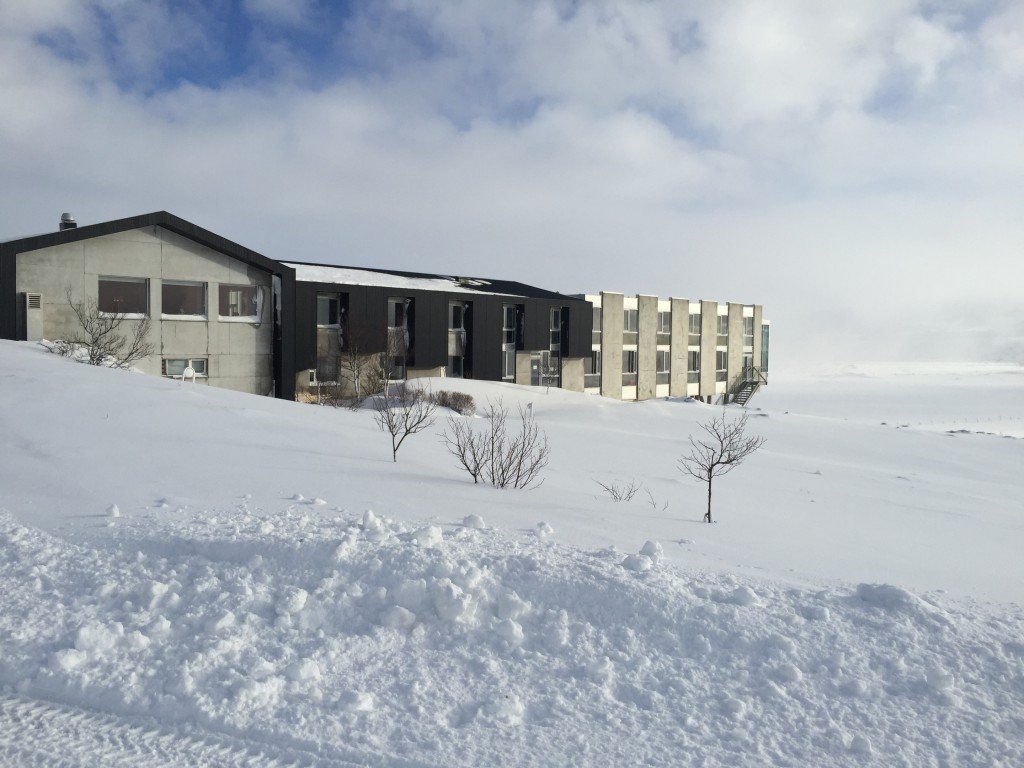 This hotel really IS in the middle of nowhere. All around was just snow and mountains. 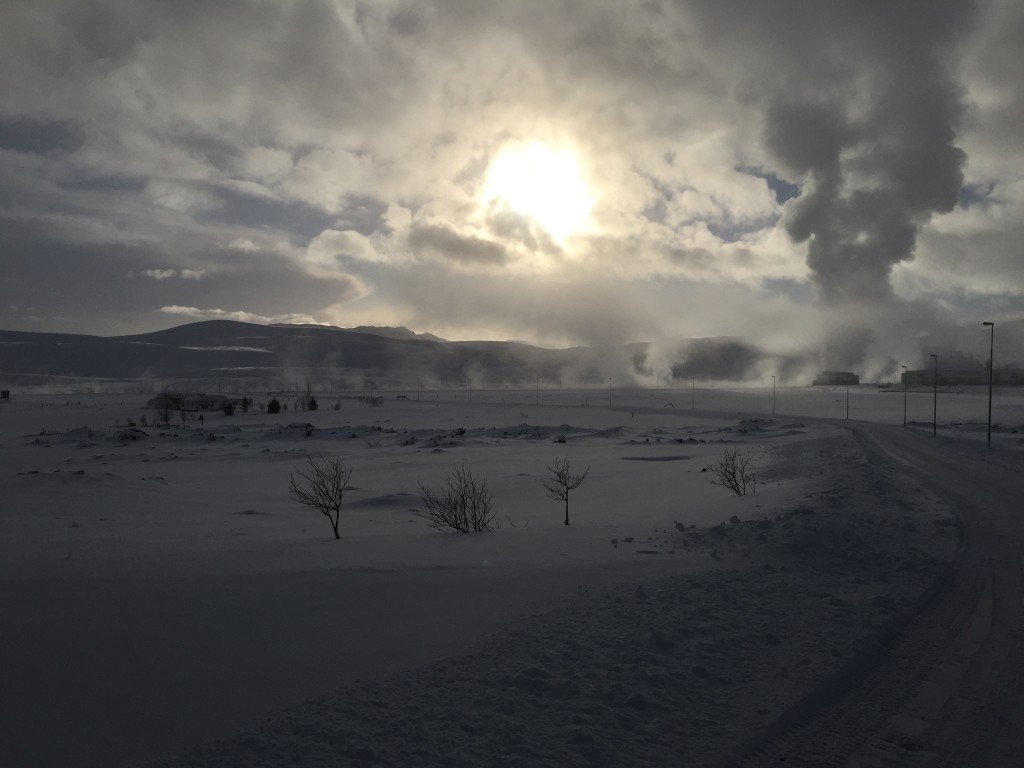 Well that and a geothermal plant. It’s a pretty dramatic setting. I checked in, and headed straight for a spot of lunch, as I hadn’t eaten yet. And it was very tasty – a smoked salmon salad with kale and basil pesto, beetroot, and feta. 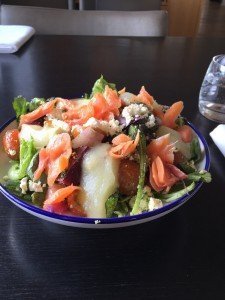 I was the only person in the smallish restaurant for lunch too. After signing the bill I said bye to the girl behind the counter, but she was too busy giggling at something on her phone to respond.

Then I headed down to my room, which although small, was fashionably decorated, and perfect for a one night stay. 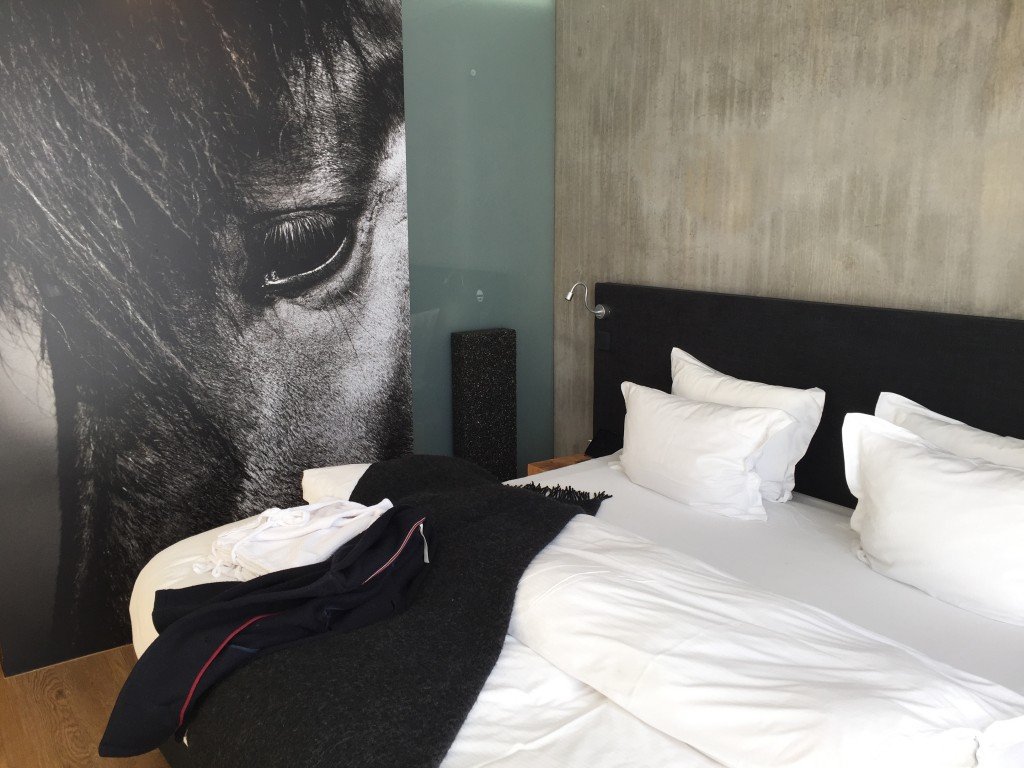 At this point I was feeling wrecked for some reason, so lay on the bed watching the first episode of the new Icelandic BBC Four series Trapped (brilliant by the way, tune in) and then snoozed for a good half hour.

Then it was off to try out the hotel’s 10 metre hot spring bath. However, I was VERY WARY about this given what had happened yesterday. So I made sure I drank loads of water before I went in, and then clambered in. 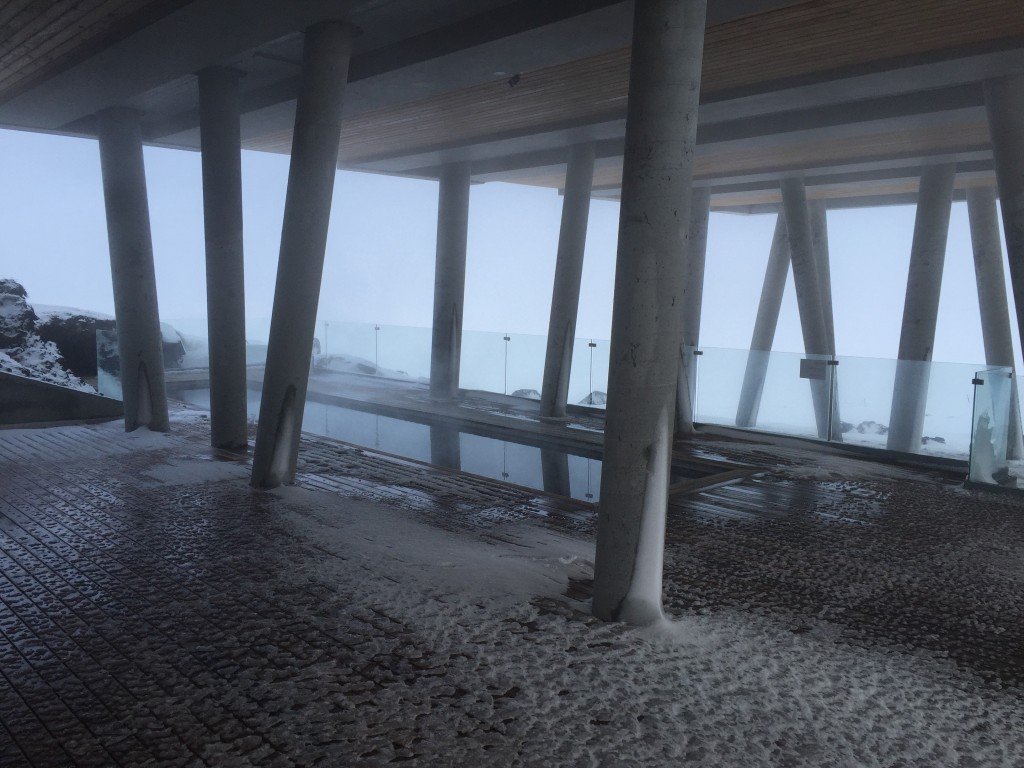 There is something about being outside in the FREEZING cold wearing just a swimsuit and then stepping in a hot pool. It’s just lovely! After ten minutes though, I’d decided I’d had enough, and didn’t want to risk collapsing on any more changing room floors. For that reason I skipped the sauna and headed to the hotel’s Northern Lights Bar for a coffee.

Blog written, I got changed, and then headed back to the restaurant – it was already 7.30pm, and time for dinner. It seemed as if my reservation – although confirmed – hadn’t made it on to the restaurant staff’s iPads, but I was quickly seated and perusing the menu over a glass of wine.

I think the food is where the hotel really stands out. I’d decided this was the ‘splurge’ bit of my week in Iceland, so went for a three course meal. To start I had poached salmon, with mustard egg sauce, cucumber, and pickled mustard seeds. 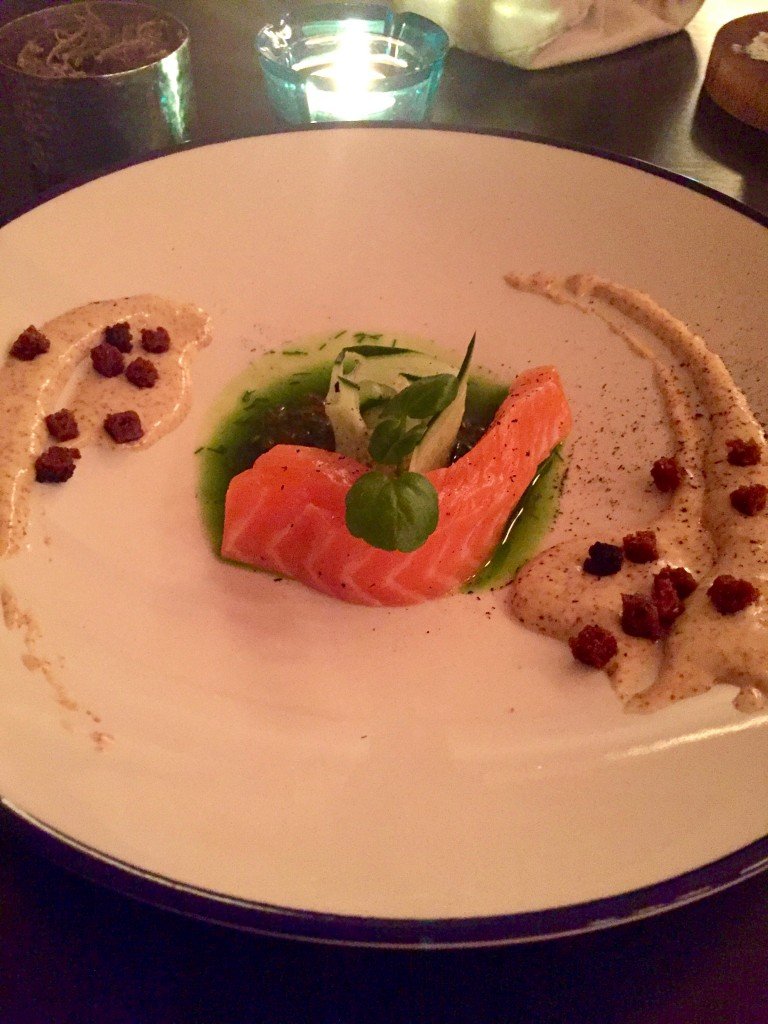 It was fantastic – really light and fresh tasting. Next up… lamb shank with cauliflower puree, pickled cauliflower, grilled spring onions and smashed potatoes with a spicy ketchup. 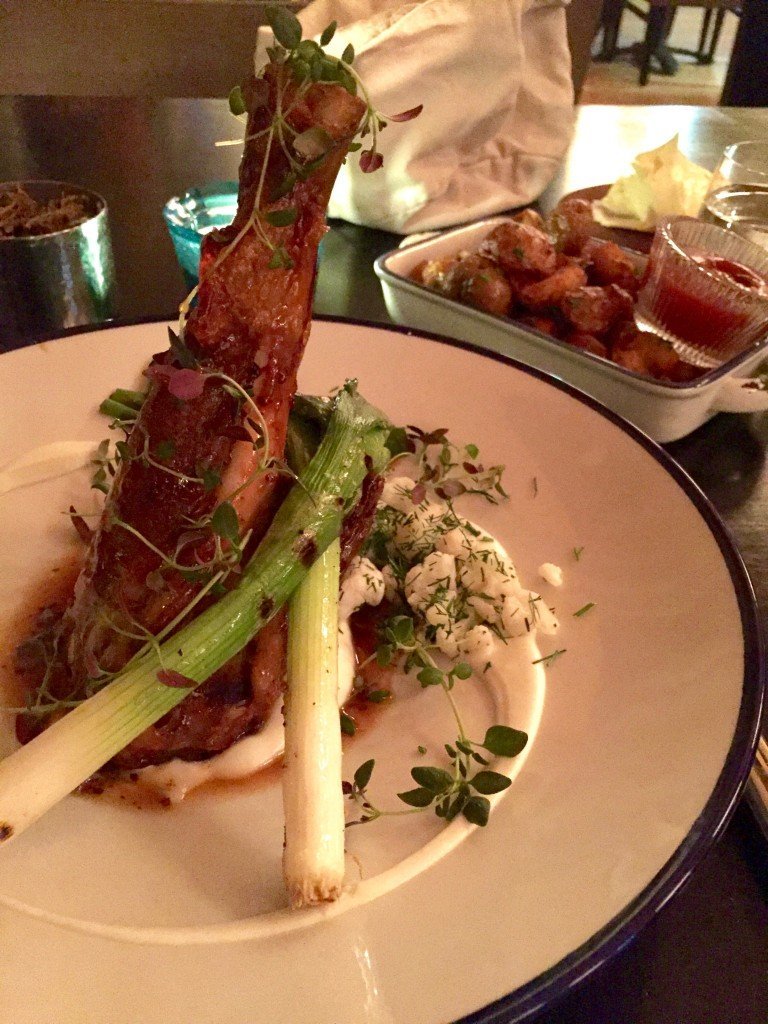 Again, really delicious. The lamb wasn’t exactly falling off the bone, but it was very, very tasty, and the accompaniments really made it. Finally, I decided to pig out and order dessert as well. They do yogurt very well in Iceland – Skyr yogurt must be coming to the UK soon! It’s really thick, and creamy. Skyr cake is a thing here, but unfortunately it wasn’t on the menu at Ion, so I settled instead for Skyr Ice Cream with Frozen Bilberries, and a Bilberry Sauce. I was a bit gutted the rhubarb oat crumble that’s on the hotel’s website wasn’t available as I’m a crumble maniac, but the ice cream was pretty good – if a little melted! 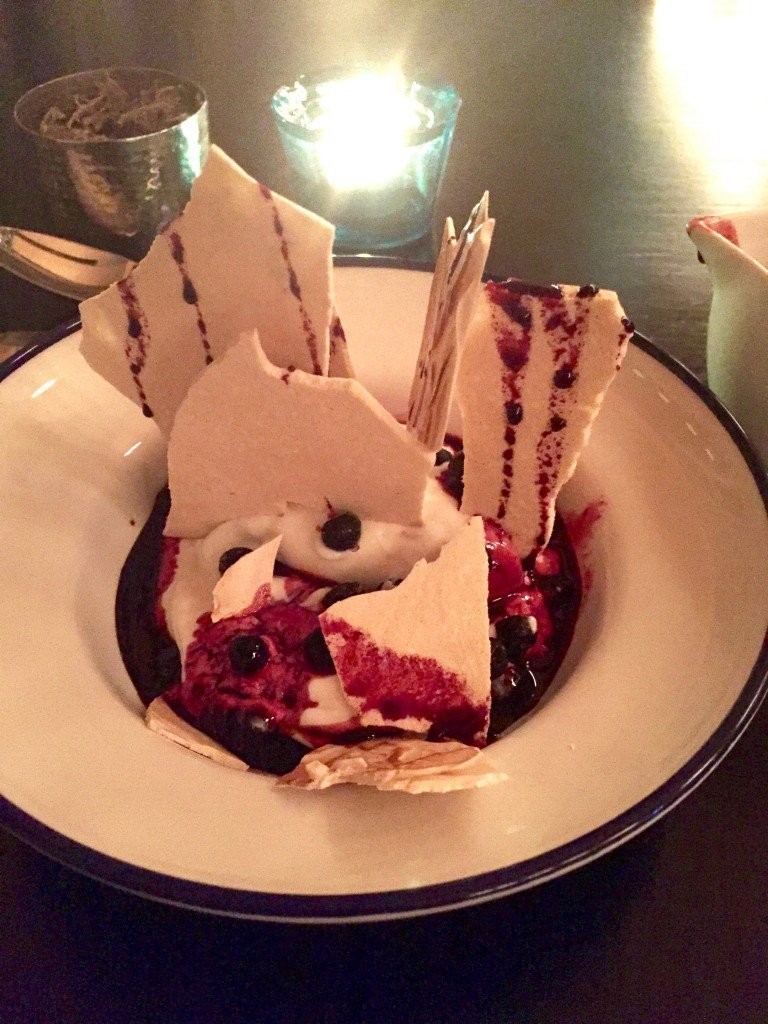 It had been a really nice meal, and the restaurant was relaxed and though pretty full, it wasn’t loud. And not intimidating either when dining alone.

I headed back to the Northern Lights Bar, and was surprised to find I was the only one there apart from the barman. 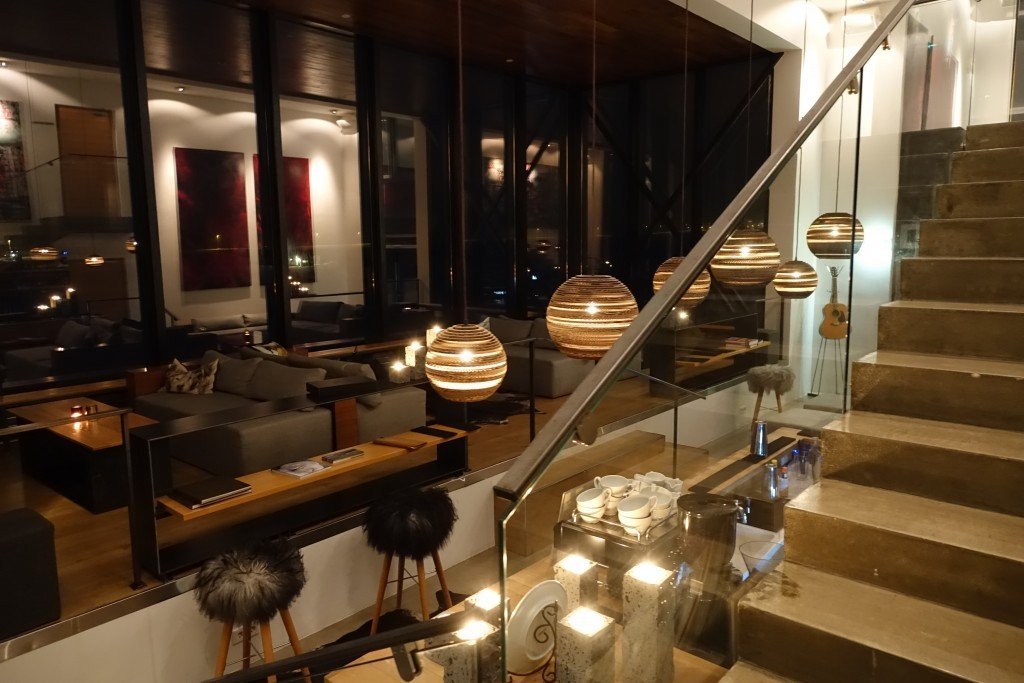 I chilled out with a book and a glass of wine, and while a couple of people came in, again it was never noisy. Which is the best thing about the hotel I’d say – if you’re looking for someplace to just relax in a nice environment, it’s the perfect place. The hotel’s won awards for its design, and you can understand why – it’s a nice space. However, it is limited in terms of facilities – apart from the restaurant, bar (only open from 3pm) the small pool and sauna, and a spa offering treatments there really is nothing else. While the hotel can organise some activities for you, they’re all pretty outlandish – with some of them including helicopter rides and so on, you’ll pay for them! But that might be why it calls itself “Ion Luxury Adventure Hotel” – the aim being you do order that as part of the package.

Apparently as well it’s a very different proposition during the summer, when it is possible to walk around in the area surrounding the hotel. 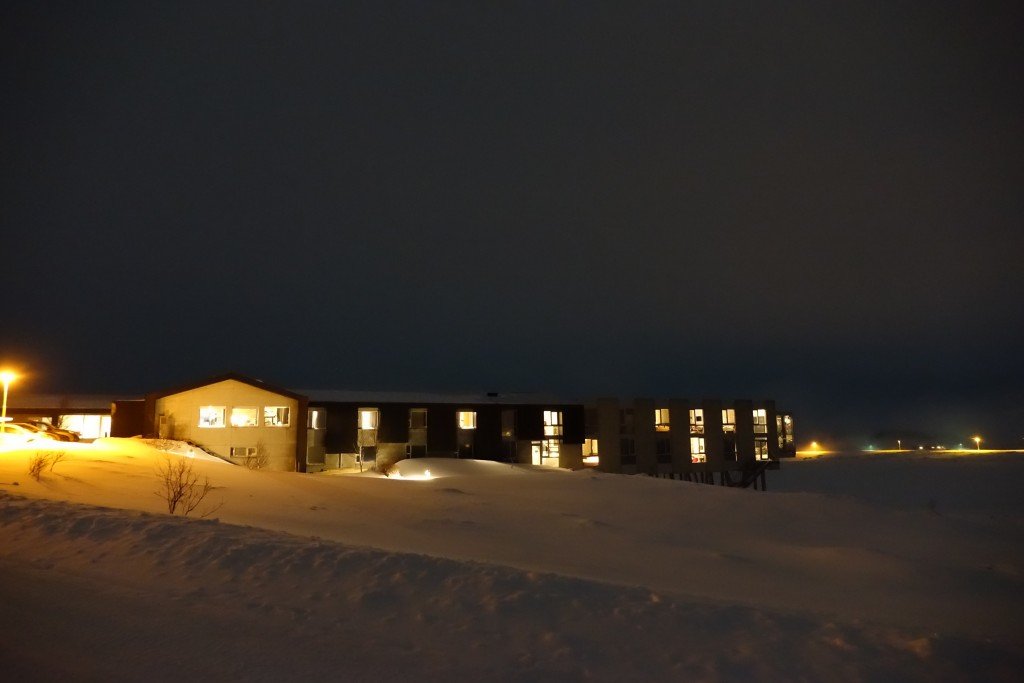 Overall though, I’d had a pleasant enough chilled out day – and eaten some beautiful food. If you can score a decent deal on a night’s stay and avoid paying their rates for transport, I’d recommend a night at the Ion. I’m glad I can check it off my list!