My alarm went off at 6.30am on Thursday morning. After quickly showering and packing (again) I headed to breakfast at the Ion hotel’s restaurant, and was the only person there! 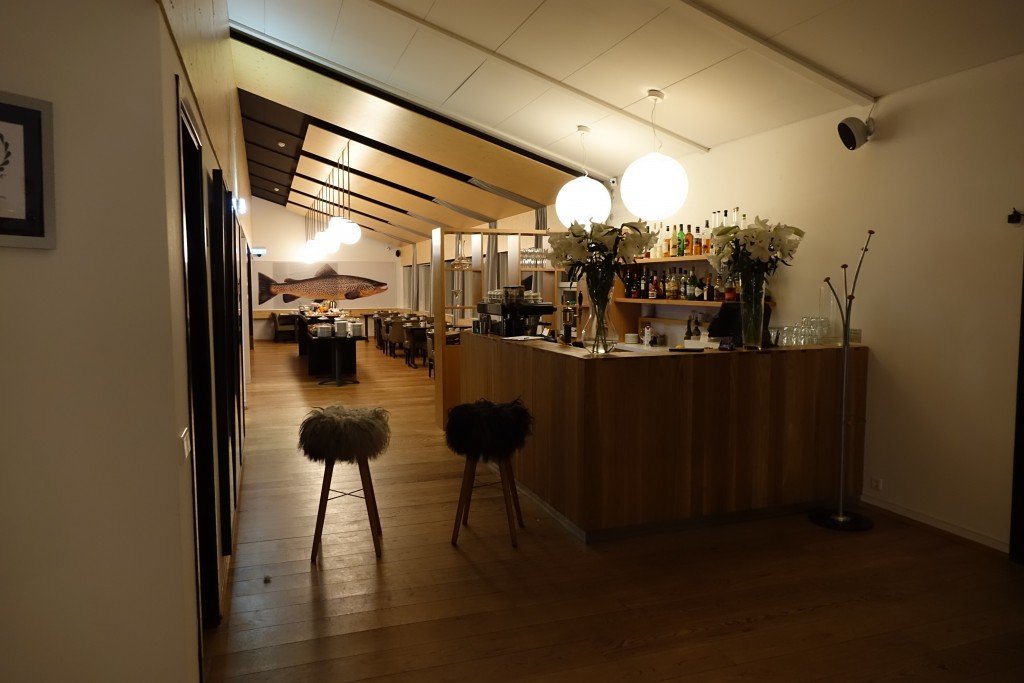 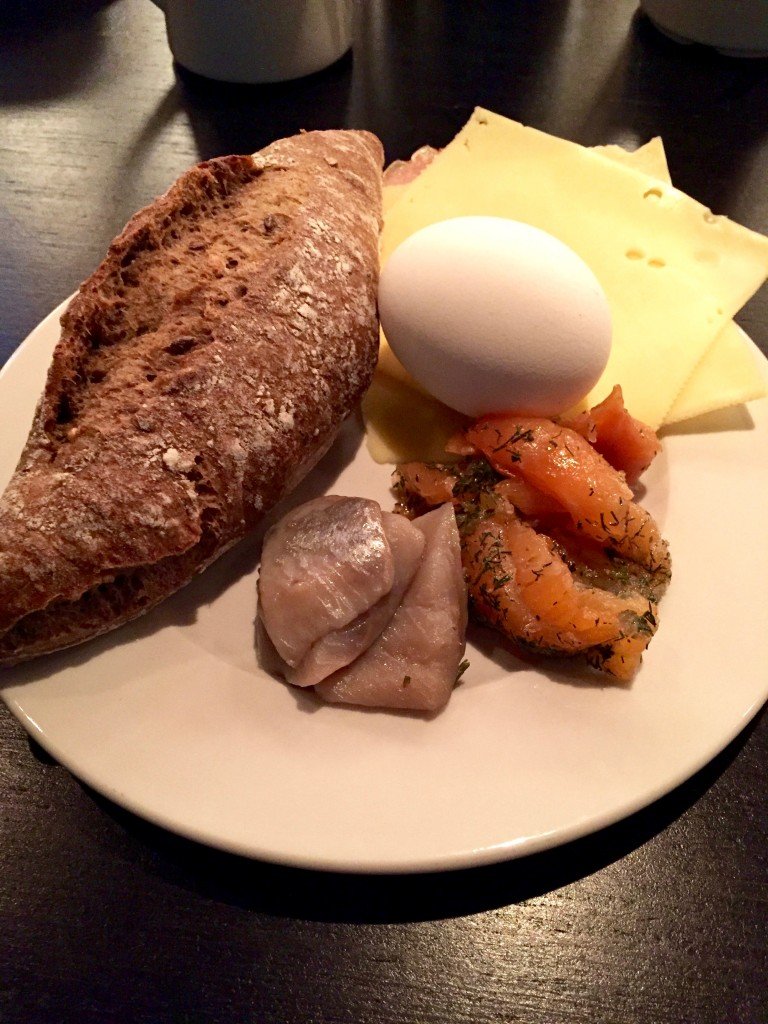 Oh and fish! I think I may be the biggest fan of rollmop herring in the world (along with my Mum). I then tried to check out, but neither my MasterCard or American Express would work in the hotel’s card machine. We suspected it was probably the connection, as the cards were being declined as soon as I typed the last digit of my PIN in, so they agreed to try again later. My taxi back to Reykjavik had arrived, and I got him to stop off halfway down the drive so I could get a good shot of the hotel. 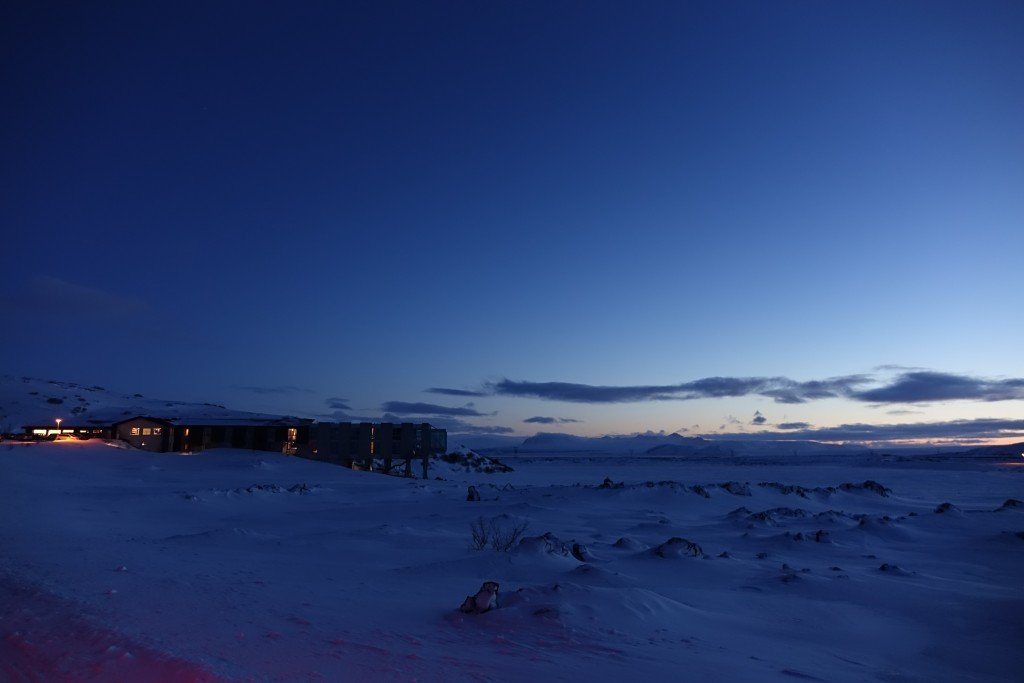 And then I got him to stop again two minutes later – I was probably doing his head in, but the sun rising over a massive frozen lake was just too good a photo to miss… 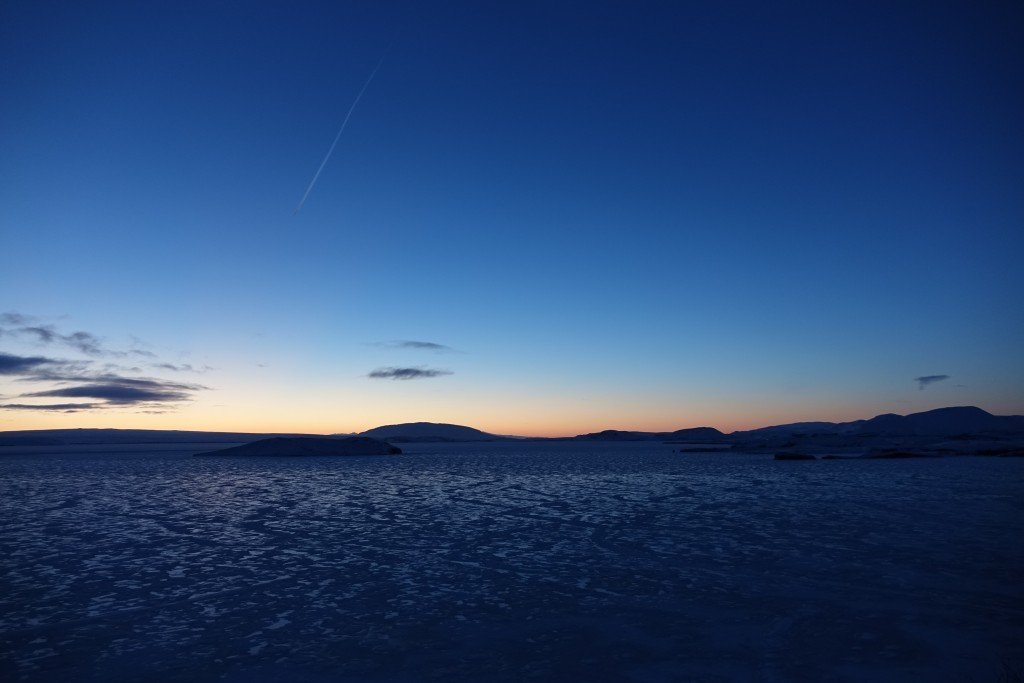 As was the view behind us… 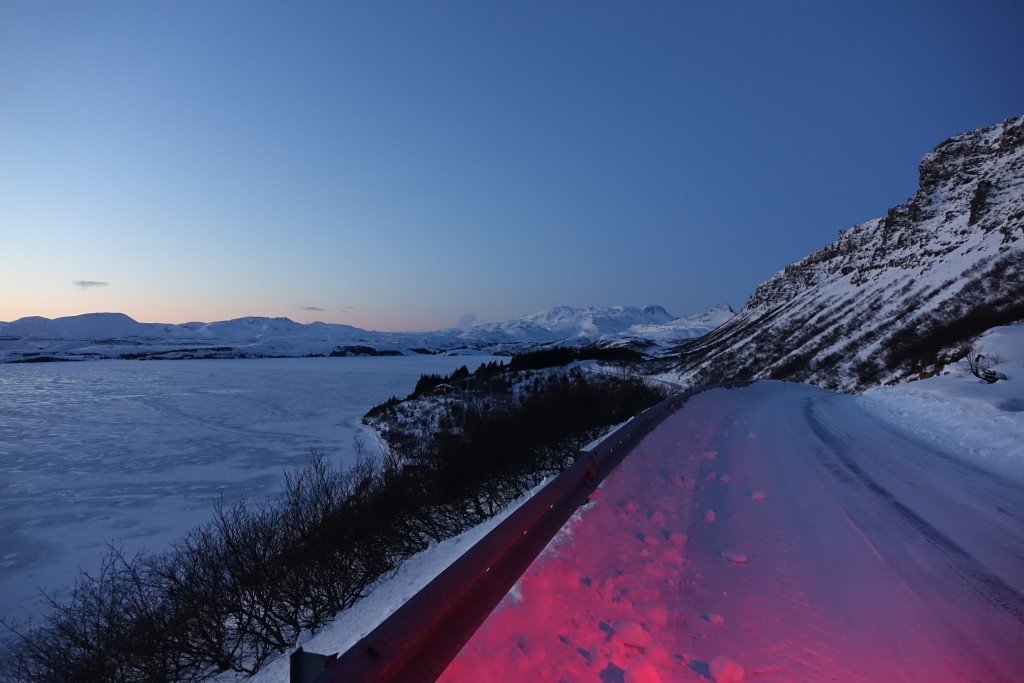 I’m really going to miss the scenery here, but I’m not sure if I could live with the biting wind all the time, that’s definitely a down side!

Because of rush hour, it took a good hour and ten minutes before I was dropped off at the bus station for a coach to the Blue Lagoon. I was half an hour early, so wandered into the cafe, where I decided to give the second item on the specialities menu a miss. 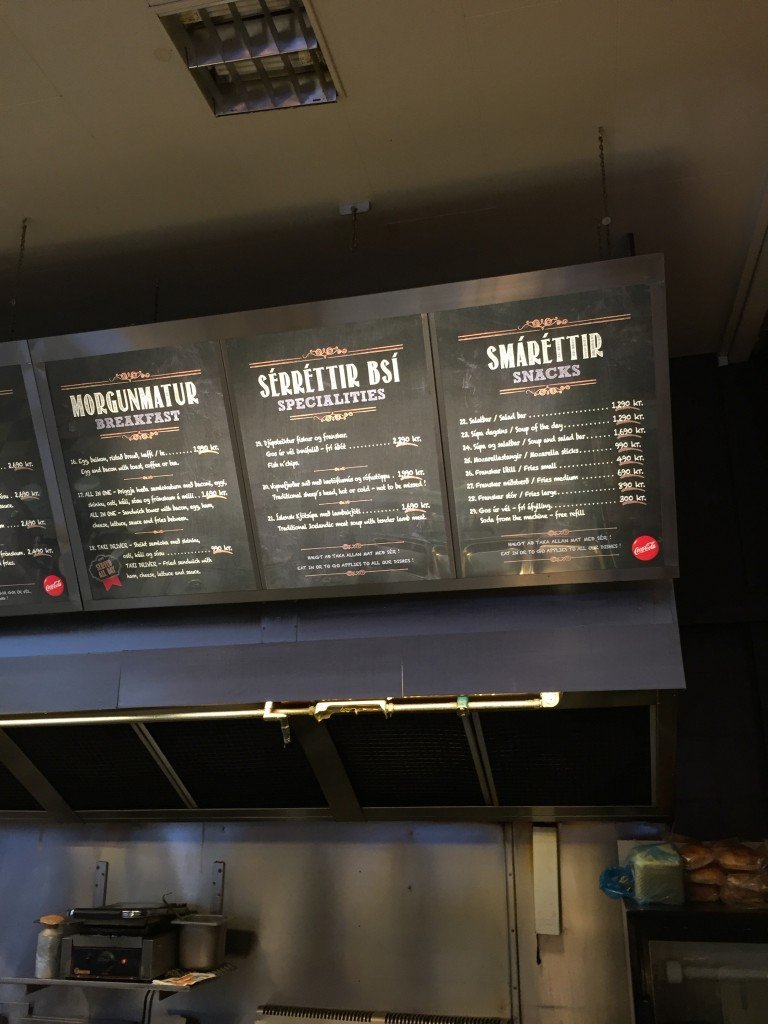 It was traditional sheep’s head – which you could have hot or cold!

Then it was on to the bus for the forty five minute journey to the Blue Lagoon. The bus was RAMMED which just made me think I wasn’t going to enjoy the Blue Lagoon experience. It’s probably Iceland’s biggest tourist attraction (I’m guessing) and I just thought it would be crowded and tacky. I couldn’t have been further from the truth! 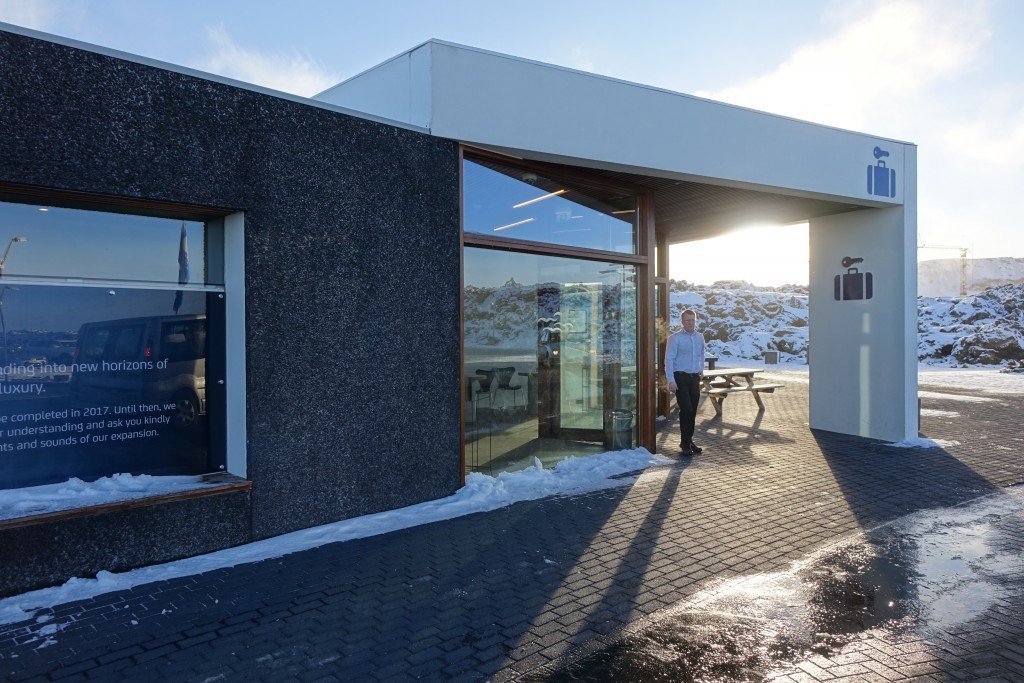 It’s very slick and well organised – the first thing you see pulling up at the car park is a small building where you can leave your luggage (a lot of people come straight here from the airport, as it’s close by, or head there on their way to the airport). Then you take a small path up to the main building. 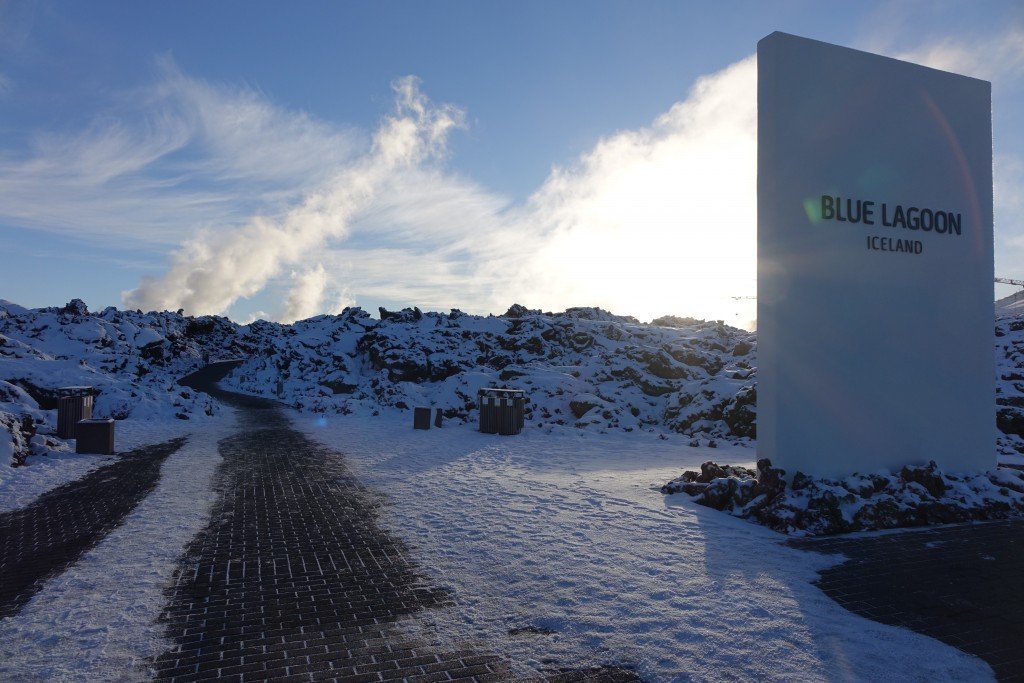 Once you get there, you join a line based on what kind of ticket you’ve pre-purchased. I’d bought a ‘Comfort’ ticket, which basically includes a towel, a free drink of your choice, and ‘miracle masks’ – though I wasn’t sure what they were. You’re given a wristband which acts as the key to your locker, and you can charge items to it as well.

After changing and showering, it was time to step into the lagoon – once more, it was freezing outside! 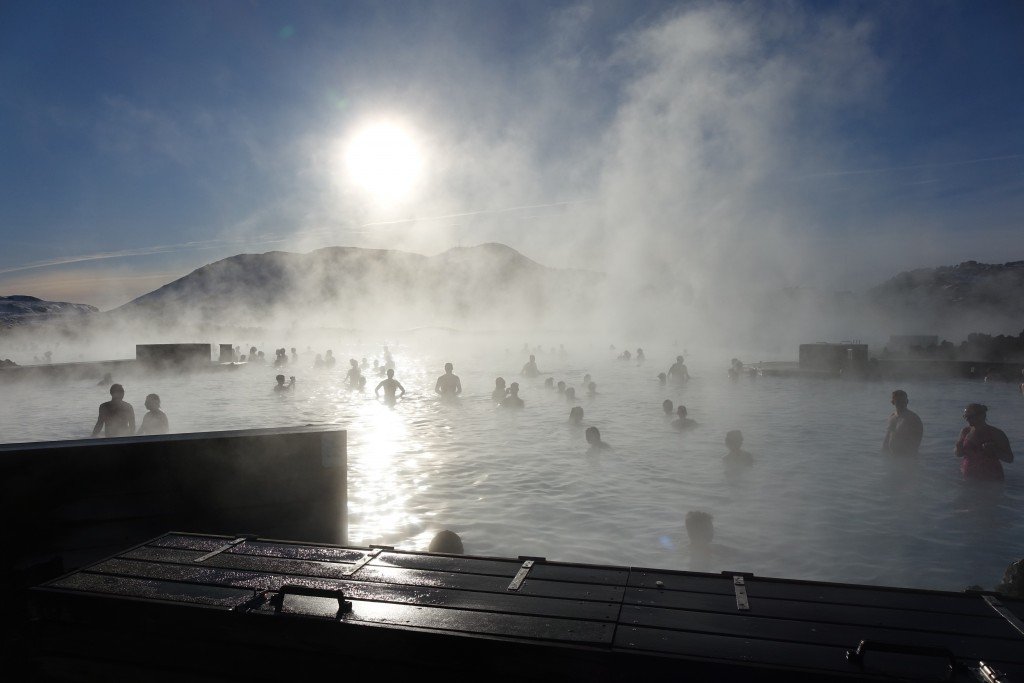 Three things came to mind almost straight away. 1) It really didn’t seem that busy – there was loads of room to move around, and sit by yourself if you wanted. 2) The water wasn’t actually that hot – it was pleasantly warm, which made me feel less likely to be repeating my faint in the changing room experience (still cautious!) There are hot sections though if that’s your preference. 3) A layer of steam over the water helps give you the impression that it’s really not that crowded at all – there are bits where you can barely see in front of you.

The water seemed a bit milky as well due to the silica present. It’s a man made experience really – the water comes from a geothermal plant next door – but it was extremely relaxing. I headed to the in-lagoon bar, got a beer with my wristband and just mosied around in the water for a good 45 minutes. It was sooooo relaxing, and for the first time in ages I felt properly chilled out. 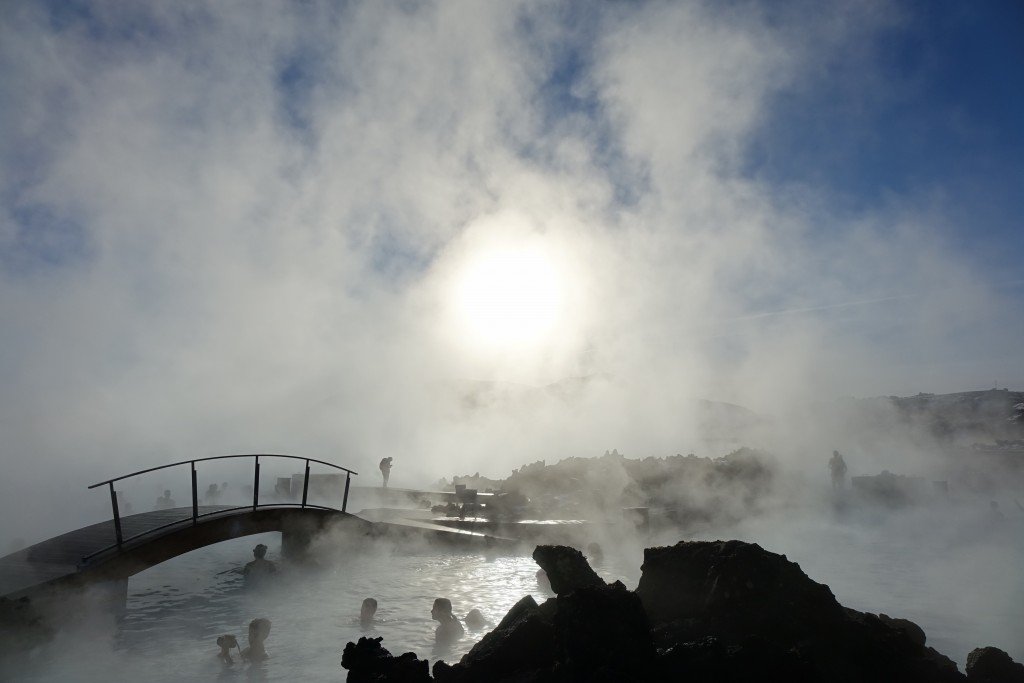 Going up to a hut, I got a silica face mask (you gotta try it right!) and because I had the Comfort package, I got to return for an algae mask too which I tried out. Then I had a peek in the (small) sauna and steam room before getting back into the lagoon.

I think in total I spent about an hour and a half in it – it was just very, very pleasant. And – I hold my hands up here – I was totally wrong about it being tacky and crowded. It would be great to go with a girlfriend or group of mates just to chill out.

The only slight annoyance was when I decided to get a robe to walk about and take photos in. I must have worn it for six minutes tops, but it cost me £7 for the privilege, which I did feel was a bit steep! 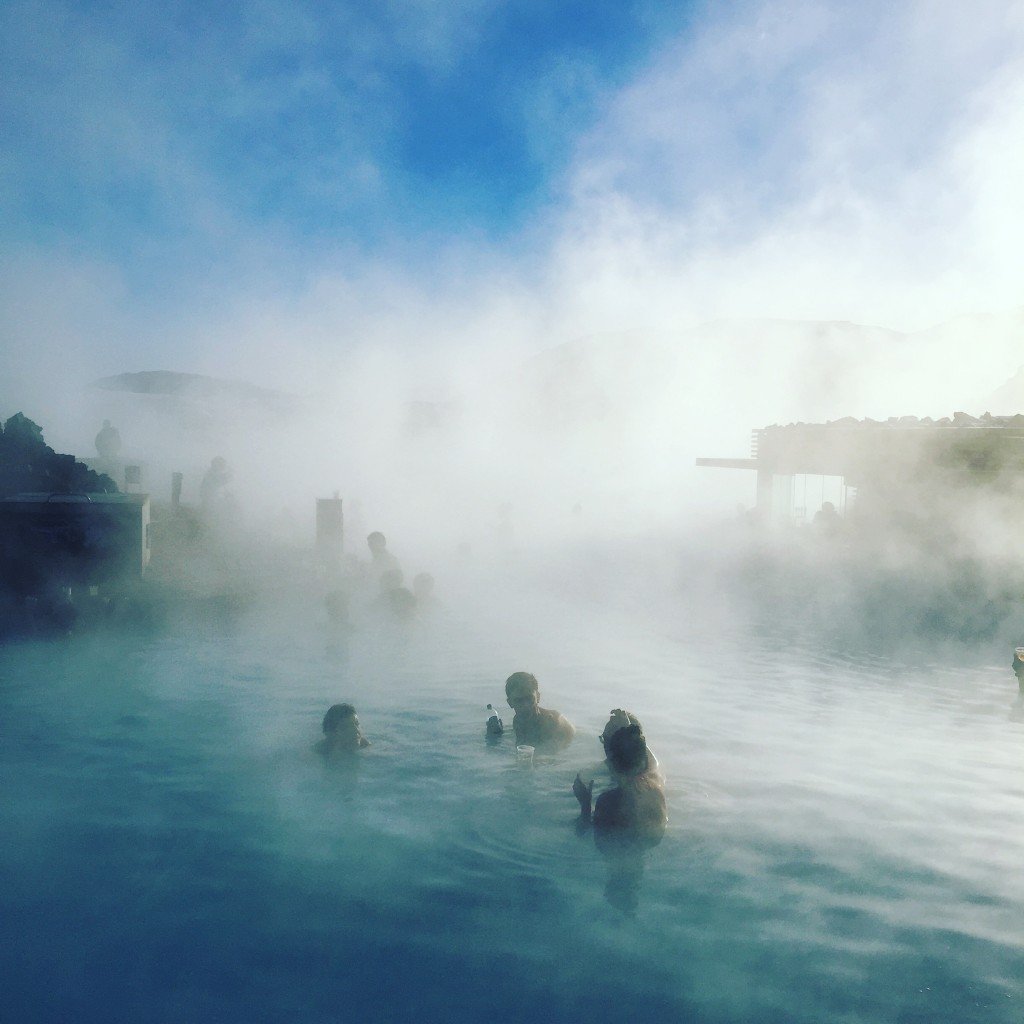 Once I’d had my fill of the lagoon, I grabbed lunch in the café and did a bit of shopping in the (expensive) Blue Lagoon shop. Then, picking up my bag from the luggage building, I got a member of staff to call my next hotel and tell them I was ready to be picked up. 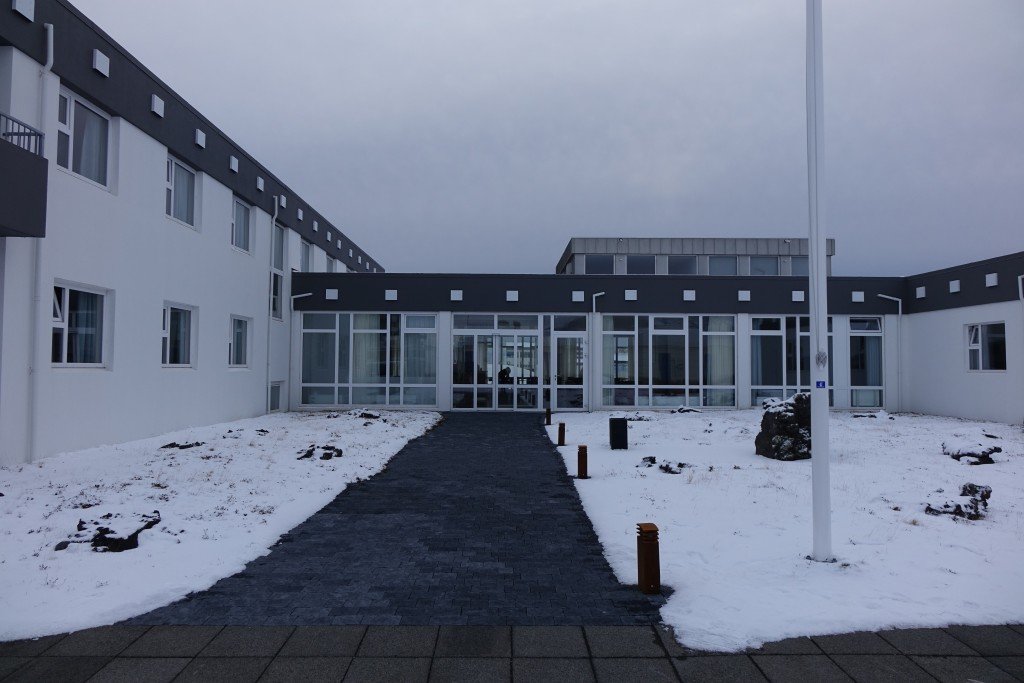 About ten minutes after being called, my transfer arrived – a wee bus driven by a lady who worked at the hotel. And she was lovely! We chatted all the way back to the hotel, and she told me a bit about Grindavík as well. It’s a small town – with the population just passing 3,000 last New Year’s Eve when an inhabitant had twins.

After checking in, the lady filled me in on what I could do with my afternoon, and I decided to take advantage of all three things she told me about.

Firstly I took a ten minute stroll to a local café down by the harbour. And on that walk, I really got the sense that for once, I was seeing the real Iceland. 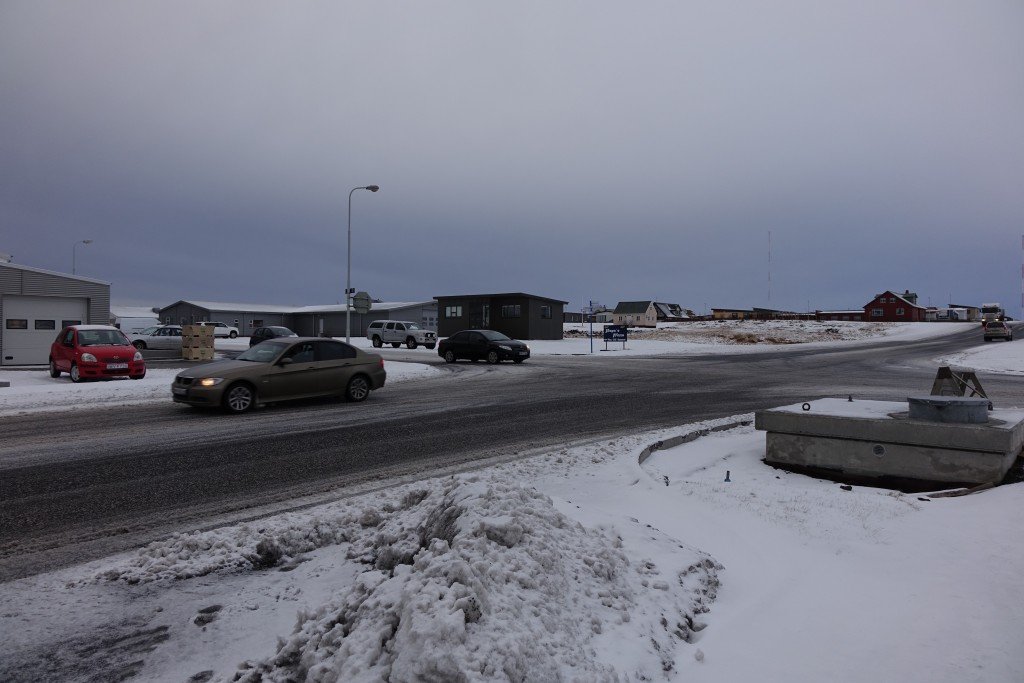 Around me was just an average small town going about its business – kids being pulled along on sledges, and coming home from school. And down by the harbour, fishermen bringing back their haul. 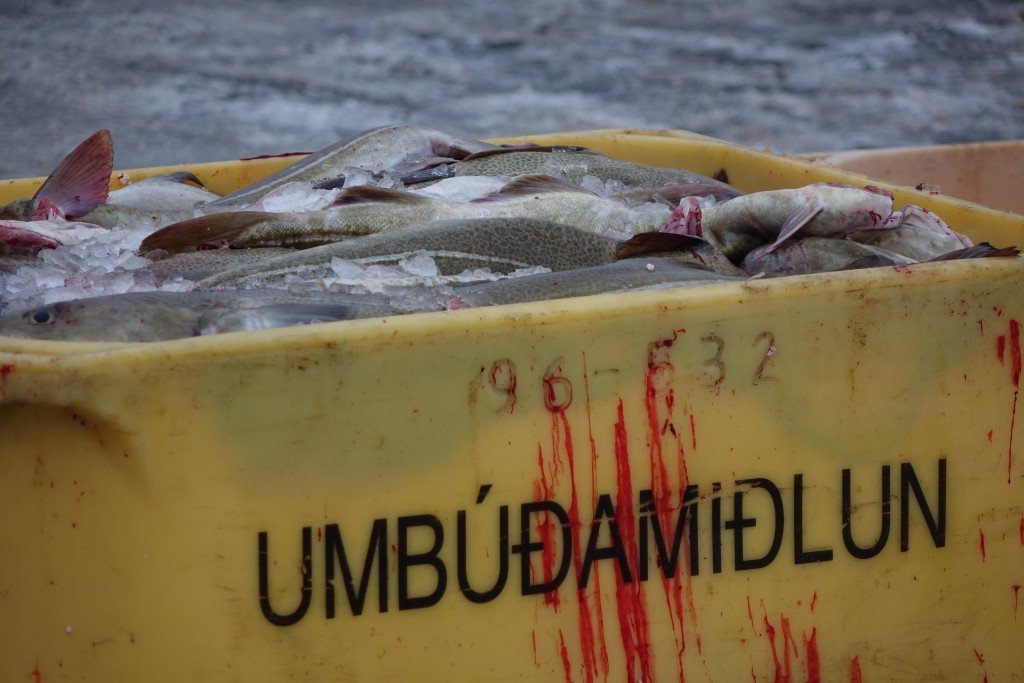 The cafe was situated along the front of the harbour – where as you can see – there wasn’t much else. 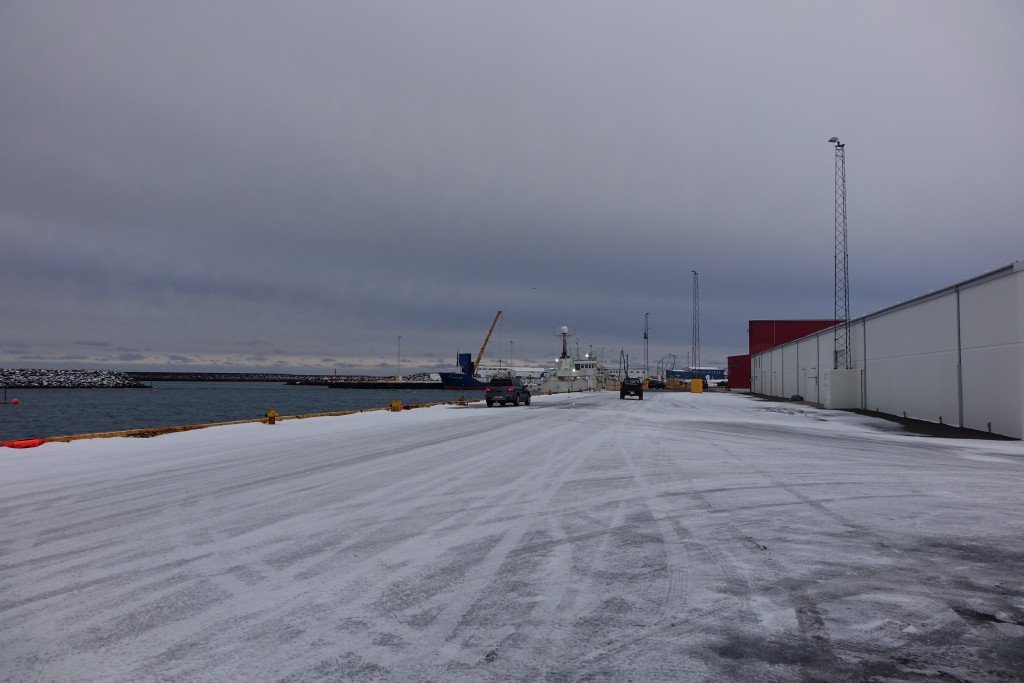 It reminded me of the town in Trapped that I’d just watched the other night. I found the café – Bryggjan (Pier in Icelandic) – thanks to the receptionist’s perfect directions and headed inside to the warmth. 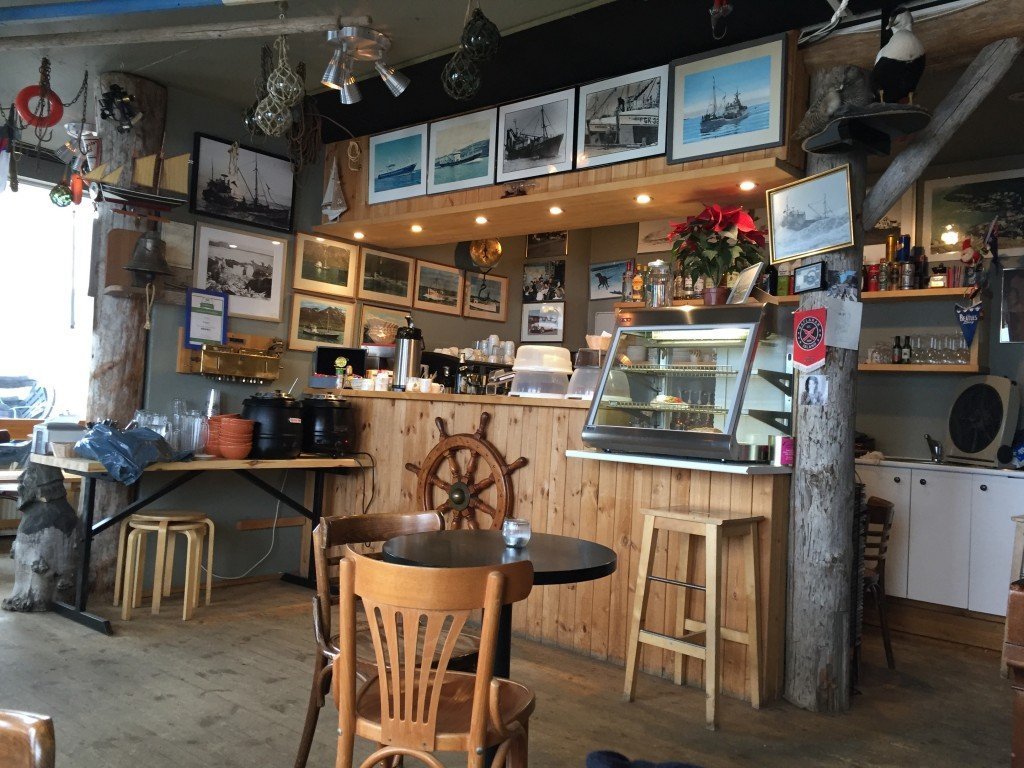 It was a cool little spot. “Love is In The Air” was playing on the stereo while two elderly Icelandic men sat chatting and reading the paper. Then one went outside and smoked a pipe! It was like something out of a book. I felt it was the first place I’d been where there hadn’t been tourists. I got a mocha, sat down and wrote up my blog. Again, I just felt really chilled out (although my Blue Lagoon experience had probably helped with that!) 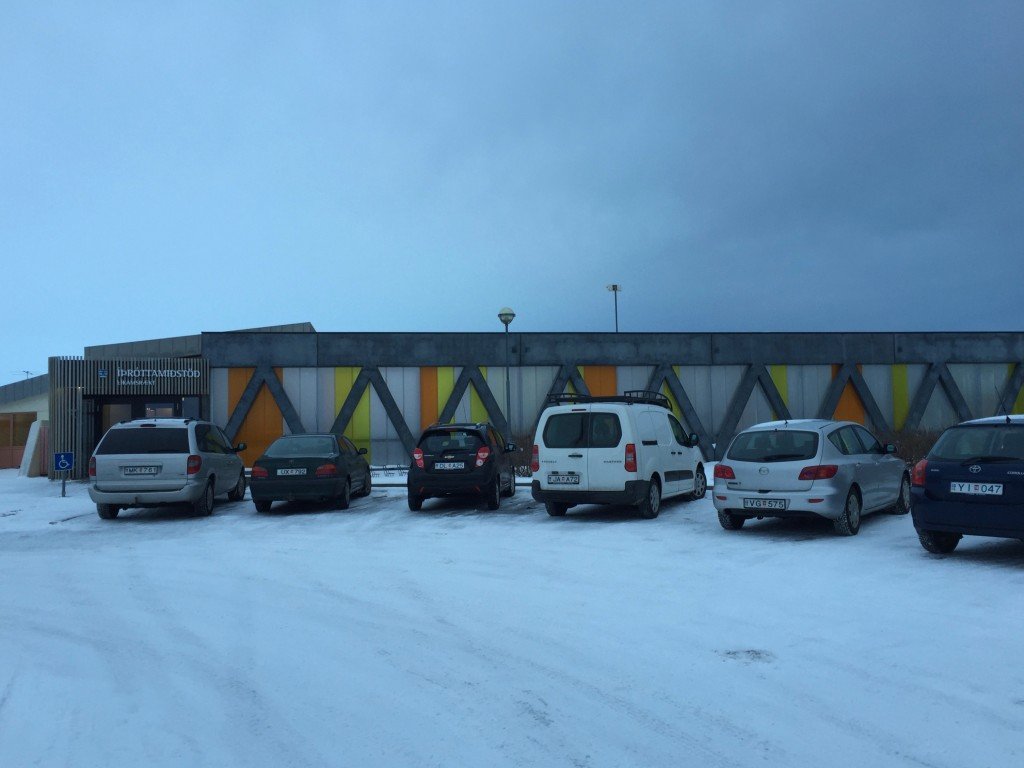 I’d been annoyed with myself for not getting up early enough the day before to get to an Icelandic swimming pool. But that was one more thing I was going to get to check off my list, as there was a pool right across the road from the hotel. I had a quick Google on it as I grabbed my swimming gear from the hotel, and discovered it only had an outdoor pool. ‘Well’ I thought, ‘it all adds to the experience!’ 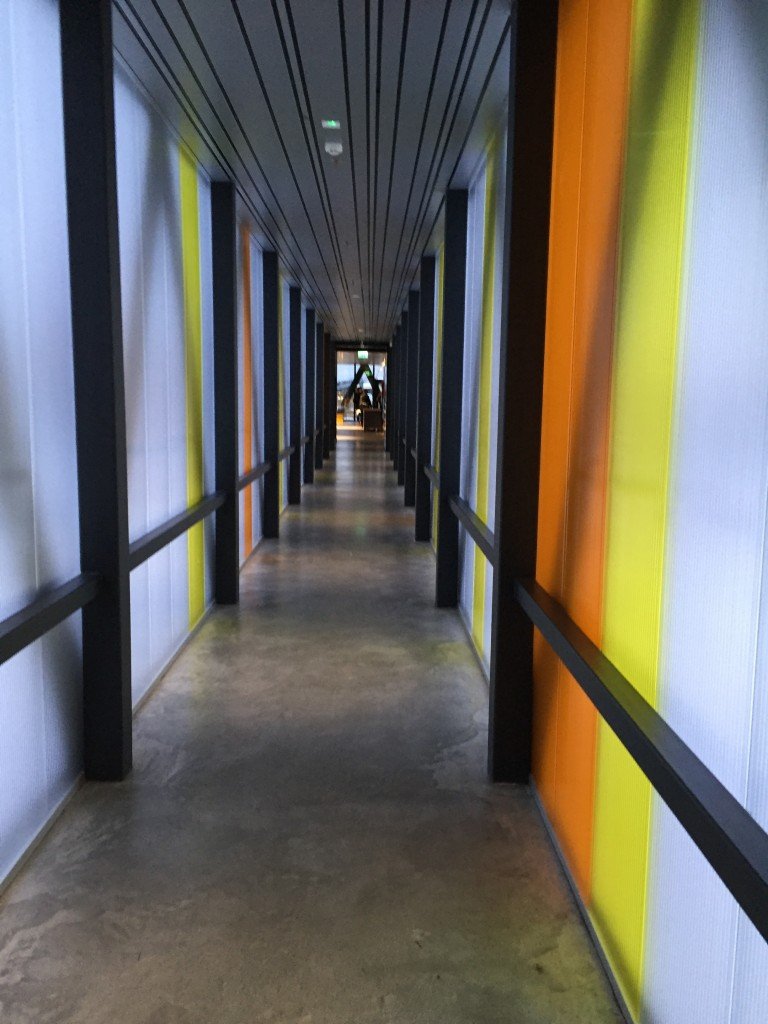 Inside was really funky – I think it must have been recently renovated and done up. I got changed, and headed outside in my swimming gear. It was FREEZING! (Although not snowing). The pool was 25m, and thankfully the water was (slightly) heated. 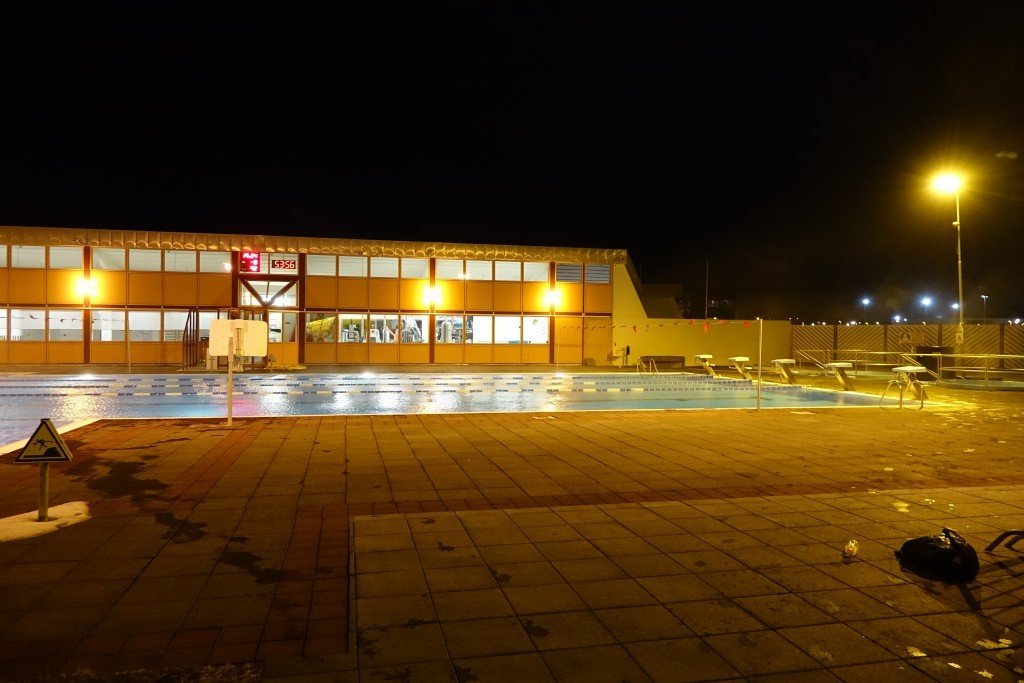 They’d gone by the time I took the picture above (after my swim) but the pool was full of kids swimming up and down like fish – they were amazing! I think it must have been a swimming lesson that they’d come to after school.

I did 80 lengths of the pool, and then got into one of the hot pools (just to the right of the photo behind the diving podiums). The kids all got in, their lesson over, and chatted away excitedly in Icelandic. It was a very simple experience – just going for a swim – but weirdly it was one of the highlights of my trip I think! Just swimming in a local outdoor pool like the locals do while it was icy cold outside was a treat. And it was a lovely pool. It did make me think why we don’t have more swimming pools here, and why they aren’t outside too.

Right across the road from the pool was a restaurant which I headed to for dinner. 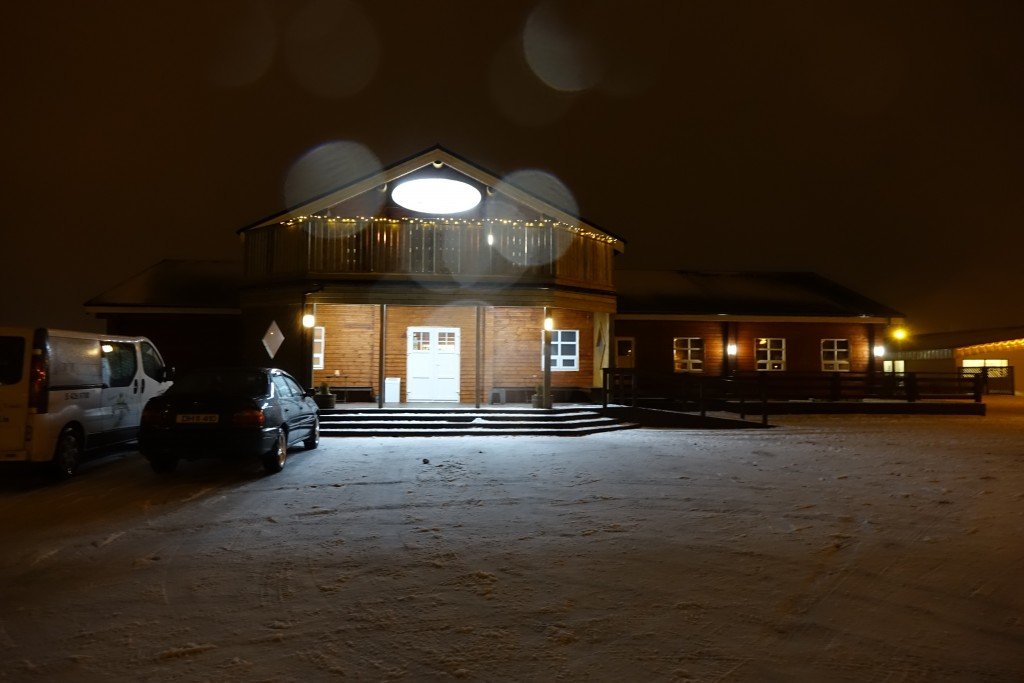 It was called Salthúsið, and again after checking it out online, I discovered it offered an Icelandic speciality – salt cod. So I decided I was going to have that as a main. 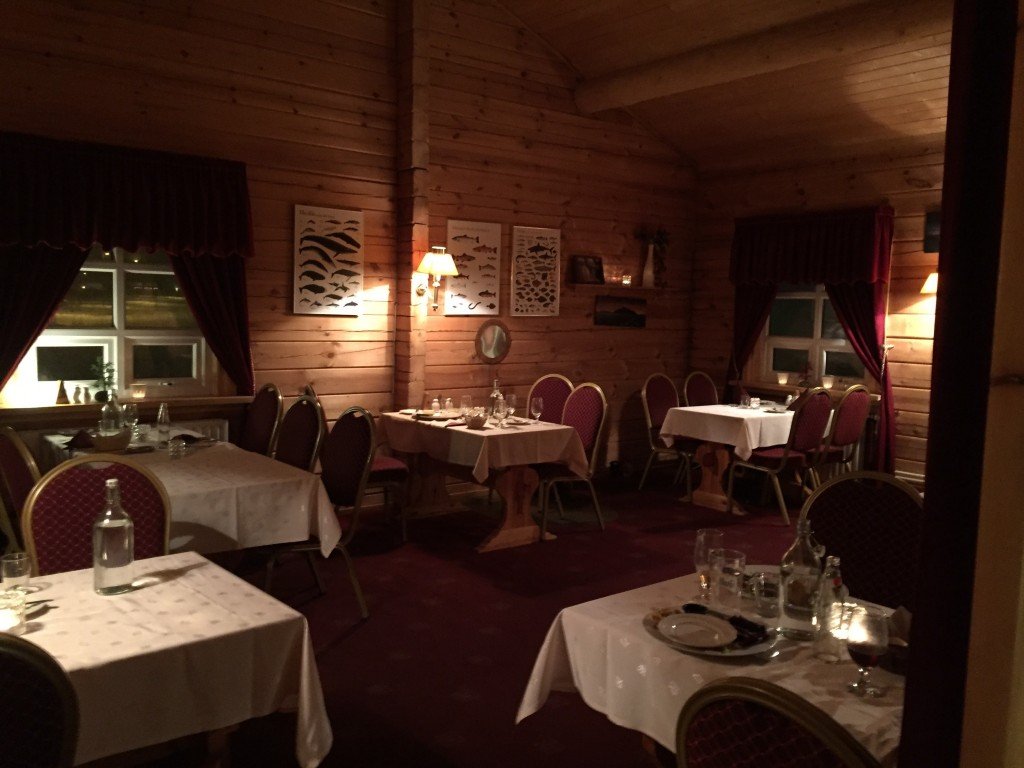 It was busy inside (not that you can tell from the above pic taken at the end of the night!) the Swiss chalet type building. I sat down and ordered fish soup as a starter. 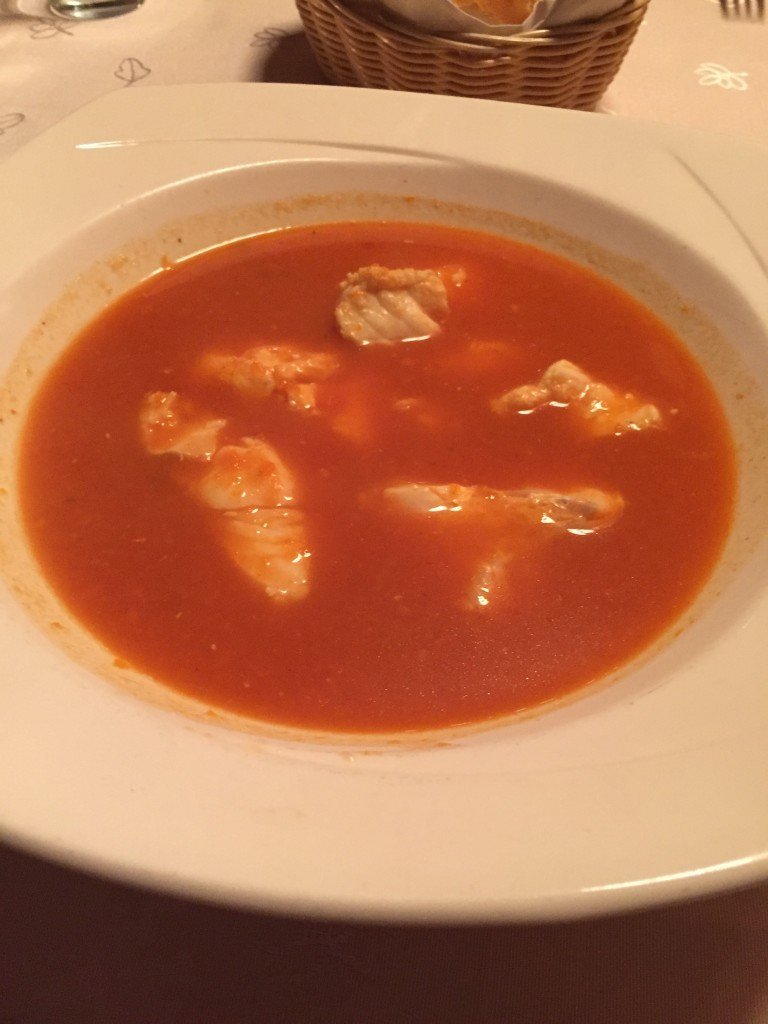 It was really tasty – with a sour kick to it. Next up was salt cod, which I had with a celery root purée. 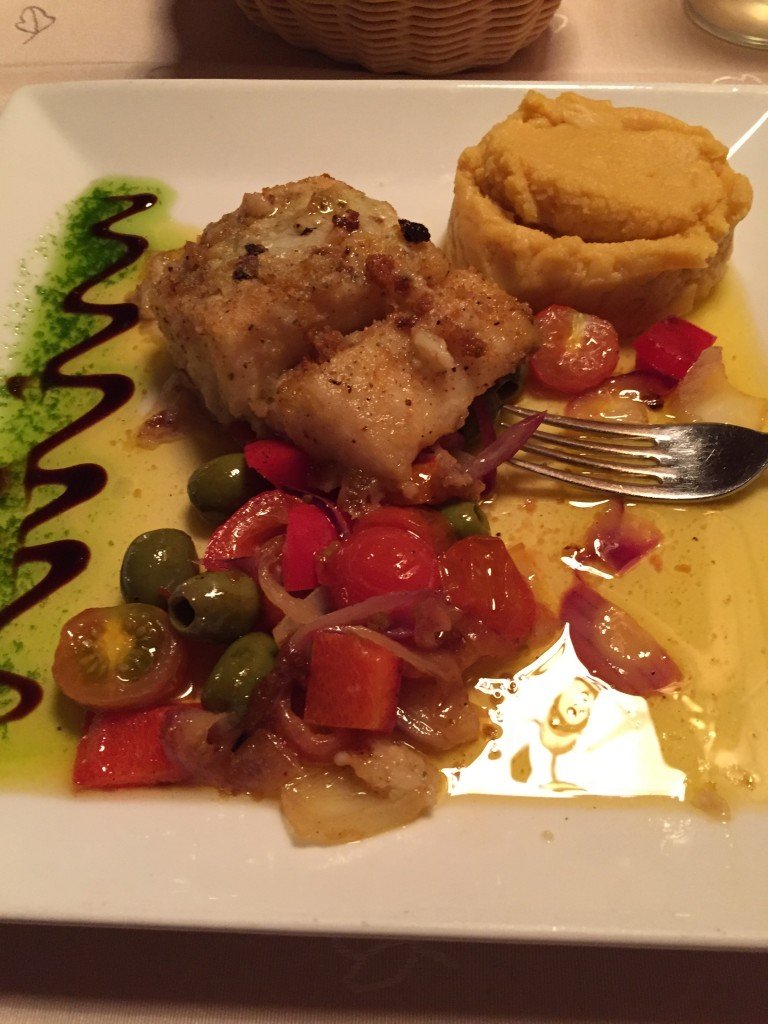 It was alright…. I’m not a massive cod fan, as I don’t think it really tastes of that much, and this just tasted like cod really. Pleasant enough but not anything mind-blowing! Dinner, with a glass of white wine came to £37, which I felt was pretty steep. Well more than pretty steep really.

After that, I headed back to my hotel – again I’d have an early start the next morning to fly home. I had a quick chat with the night porter Paul, who’d come to Grindavík from Scotland at the end of the 90s.

I’d had a great week in Iceland – looking back on it, I’ve done loads – from walking on a glacier, to seeing the Northern lights to fainting for the first time. I’d definitely recommend it for a trip – and perhaps a weekend isn’t long enough – but do be prepared to spend more than you think. I’d given myself a budget of £65 a day, and ate in quite a lot, but still went a good bit over budget. It can be pricy.

So Iceland done! Now to think about where to head off to next….