I’m on my travels again. A week off work, and Easyjet’s relatively new direct flights from Belfast to Reykjavik have given me the perfect opportunity to cross another country off my list – Iceland. So I’m here for a week! And boy it’s freeeeeezing!

I was up at 3am this morning to catch my 7am flight to Reykjavik’s Keflavík airport. I reckon I got about five hours sleep, but I was feeling alright boarding the plane – and I didn’t need to sleep on it either. About two hours and ten minutes after we took off, we were landing. Craning my neck to see out the window (I was in an aisle seat), there’s no other word to describe what I saw but mystical. Really! A low fog had descended across the airport and surrounding countryside. All you could see was snow, fog, and the tops of mountains. It was pretty amazing. I don’t think the picture below does it justice! 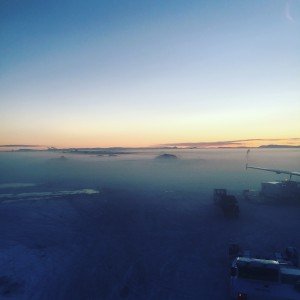 And the whole arrival process was smooth – by the time I’d meandered through duty free, and got money out an ATM, my bag was already on the belt. I nipped into an airport shop and bought an Icelandic sim – if you’re heading here I’d recommend the Símmin Deluxe Start Package. Sim card, 100 minutes, 100 texts (to Iceland obviously) and 1GB data for about £16. Good deal, and their signal’s been great so far.

Phone sorted, I headed into Reykjavik, but I wouldn’t be there long. I picked up a hire car (after eventually finding the AVIS office in a small shopping centre), and trusty Google Maps in hand, I set off for the two and a half hour drive to the small town of Vik. And what a drive. Absolutely breathtaking – around every corner is just another unbeatable bit of scenery. 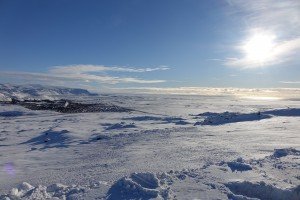 To be honest, I was very worried about driving in Iceland. If you research it you’ll find a whole load of scare stories saying you need a 4×4, snow chains, blah blah blah. I posted a message on Lonely Planet’s forum to check all this out, where thankfully a local replied and said if you were sticking to main roads, all you needed was a normal car and studded tyres. But you do need to check driving conditions. And when I looked at this map last week, featuring the road I was planning to take, the road was marked as impassible due to snow. Thankfully today it was just highlighted as being slippery. Still I was very careful on my drive. And I was CONCENTRATING VERY HARD on the road. 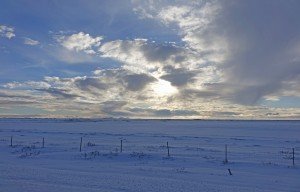 After about a half hour drive, I reached the town of Hveragerði. My windscreen wash had already run out, so I quickly bought some and topped it up, and then headed to a little bakery called Almar Bakarí for lunch. 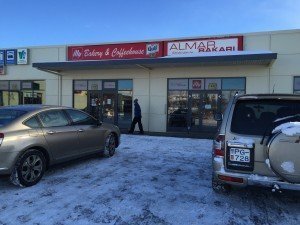 Everyone here seems to speak English, which is amazingly convenient, but that also means you don’t need to put any effort into learning any Icelandic at all. I need to start getting into the habit of at least saying þakka þér instead of thank you! I grabbed a tasty bagel and a spinach drink… 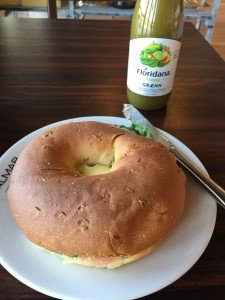 I checked my guidebook for what else there was to do in the town and read about the Geothermal Park where you can boil an egg in open water! I liked the sound of that. But when I found it… 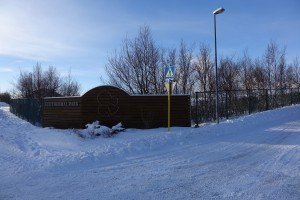 it didn’t look that exciting… 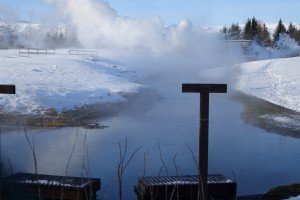 or busy… so I’ll admit, I gave it a miss and hopped back in the car to continue my drive instead. 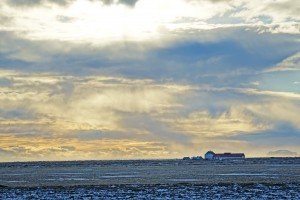 It was hard to keep focussed on the road really when around every bend the scenery changed – and each time it was stunning. 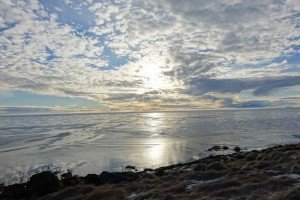 That photo above has not been through Photoshop!

One thing I have noticed since I got here – and I don’t know if it’s the cold or what – but I am constantly needing to do the toilet! I only had a two hour drive after my stop for lunch, but half an hour after driving, I needed to stop again – and I hadn’t drunk anything really! This time, in the town of Hella, for the second time I spotted this… 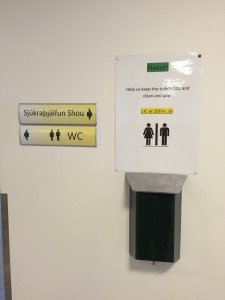 So what I want to know is does everyone pay to use the toilet in shopping centres? Or is it just tourists, seeing as there’s only signs in English? I will get to the bottom of it! 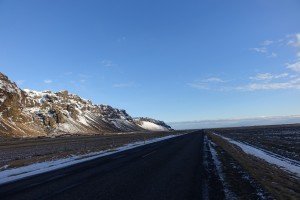 Back on the road, I had one more pitstop I wanted to make before I arrived at Vik where I’d spend the night. Using GPS co-ordinates I found on the internet, I pulled off the main Route 1, through a gate on the side of the road and parked up.

This was the view – but it wasn’t what I was here for…. 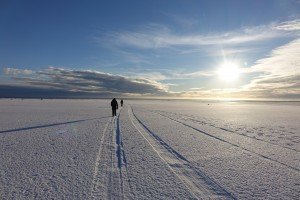 I had a 45 minute walk ahead of me – I could have risked it in the car (seeing as AVIS had actually upgraded me to a 4×4), but didn’t want to, seeing as the snow looked deep and speckled with icy patches. So I started walking. And walking. And walking. Then I needed the toilet again. But there was nowhere to hide – and by now I’d overtaken the two people walking in front of me in the picture above. So I had to wait for them to catch up, then overtake me – which – trust me – seemed like an eternal wait.

Anyhoo! After crunching through the snow for 45 minutes, bracing against the freezing wind, I finally arrived at my destination… 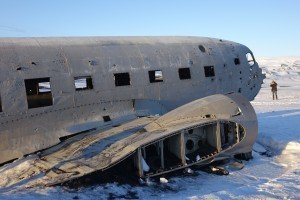 On a beach (which you couldn’t see for snow) – the plane wreck of a DC3 United States Navy plane which crashed in 1973. No-one was injured thankfully, but the wreck’s just sat there ever since. It’s a weird, and spooky sight. 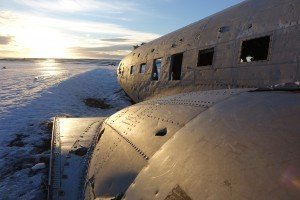 It’s also become a bit of a local attraction – with guides charging a fair whack apparently to show you where it is and drive you almost right up to it. So it was kind of tricky to get photos which didn’t include the fifteen or so tourists that were there clambering about. Including the boy who kept sticking his head through windows and yelling while I just about had the perfect shot. Who then did a fair bit of crying when unfortunately he ran and slipped on the ice.

After I got loads of shots, it was time to walk back to the car. And boy, I did NOT fancy walking back to the car. The wind was whipping around me, and the barren landscape just offered no shelter – but again the view did kind of make up for it. 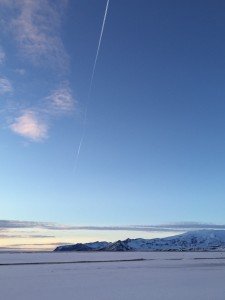 Now I was just twenty minutes away from Vik. But unfortunately for me and my trusty Suzuki Swift, the weather had taken a bit of a turn for the worse. Snow was blowing across the road like water, and all I could see really was white. It was tricky, but eventually I did arrive at my hotel for the night. I couldn’t wait to jump in the shower and try and warm up, which I eventually managed.

Rather than eat in the hotel, I wanted to eat as the locals eat. Vik’s tiny really – with a population of around just 300. So I picked one of the local restaurants Halldórskaffi, and being a glutton for punishment decided to walk rather than take the car. 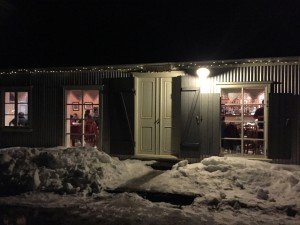 It was really, really comfortable and warm inside, and the staff were lovely – even if they were a bit rushed off their feet. One of them was extremely attractive. It’s got to be said – most of the guests were of very noisy tourists of a certain nationality. One woman was SO LOUD I could hear every word of her conversation – despite her being four tables away grrr!

I had a traditional Icelandic dish for dinner…. 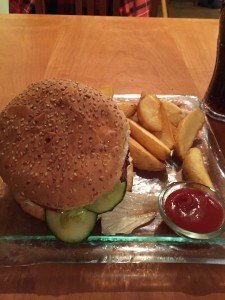 God it was good – I went for their special burger and it was JUST what I needed after a day driving and walking in the snow. It tasted like heaven!

Then it was a trudge in the freezing wind and snow back to the hotel, where I’m writing this. I’ve been sitting thinking I hadn’t actually done that much today – but I feel like I’ve actually seen loads.

Right now, I’m looking forward to a good night’s sleep (sadly in a double bed with two single duvets, what’s with that) before what I’ve got planned tomorrow – which will involve a lot more walking.